Novgorod Guberniya as the Centre of the Earth 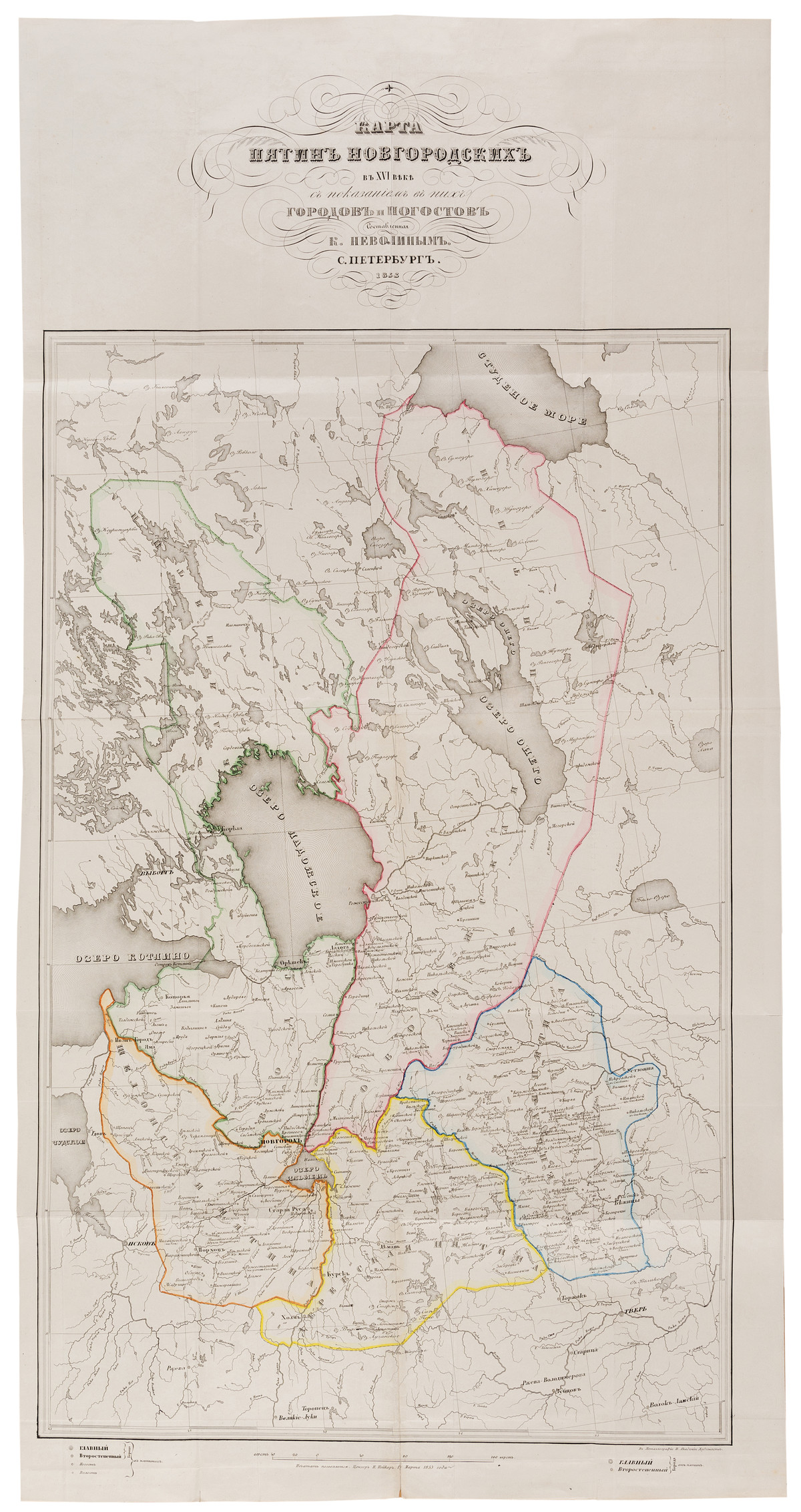 The map of Novgorod
pyatinas in the 16th century,
with an indication of cities
and pogosts, compiled
by K. Nevolin 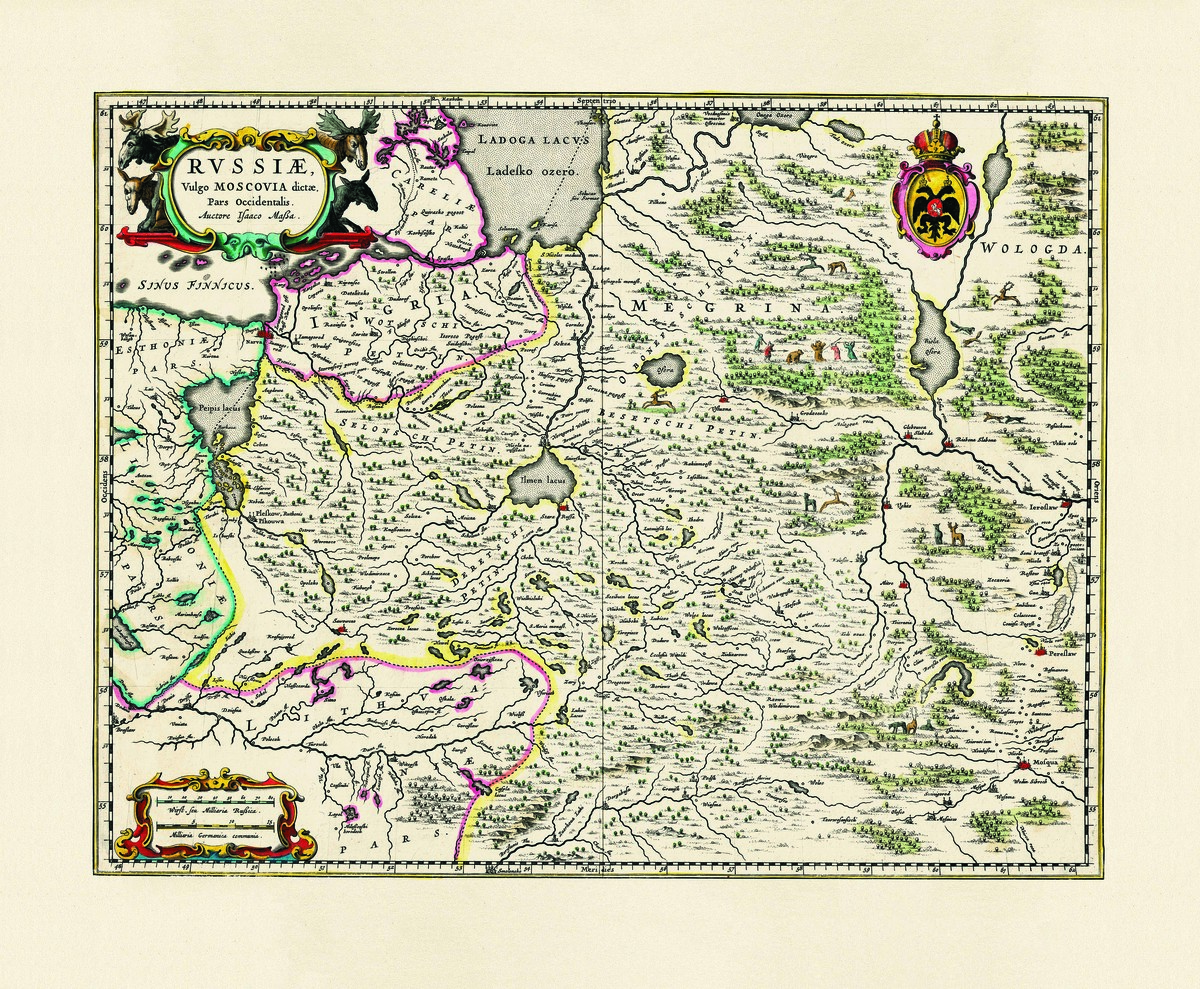 Isaac Massa (1587–1635) was a Dutch trader and traveller. In 1625, he was elevated to nobility by King Gustavus Adolphus of Sweden. Isaac Massa visited Muscovy five times. He spoke Russian and was well familiar with the country’s customs and traditions. In Muscovy, he acted on behalf of the States-General of the Netherlands, but did not have an official status of a Dutch ambassador. Therefore his diplomatic career was not much of a success.
However, he was able to collect valuable documentary and cartographic materials about Russia, which he later used in his books and maps of Russia. Massa is the author of two major works: a description of the Land of Samoyeds and Tartary, and the history of the war and unrest in Muscovy. The latter is an important historical source on the Time of Troubles.

Several maps of Russia were drafted based on the materials compiled by Massa. Massa’s maps were first purchased by Hessel Gerritsz, who published three maps of Russia in 1613. Following his death, Willem Blaeu bought the copper plates with the maps’ engraving and produced two new maps of Russia, which were also based on Massa’s records. These maps were printed from 1640 as part of Blaeu’s Atlas Maior, the largest cartographic project of the 17th century. Other publishers, including Hendrik Hondius and Johannes Janssonius, used Massa’s maps as models for their own cartographic works. 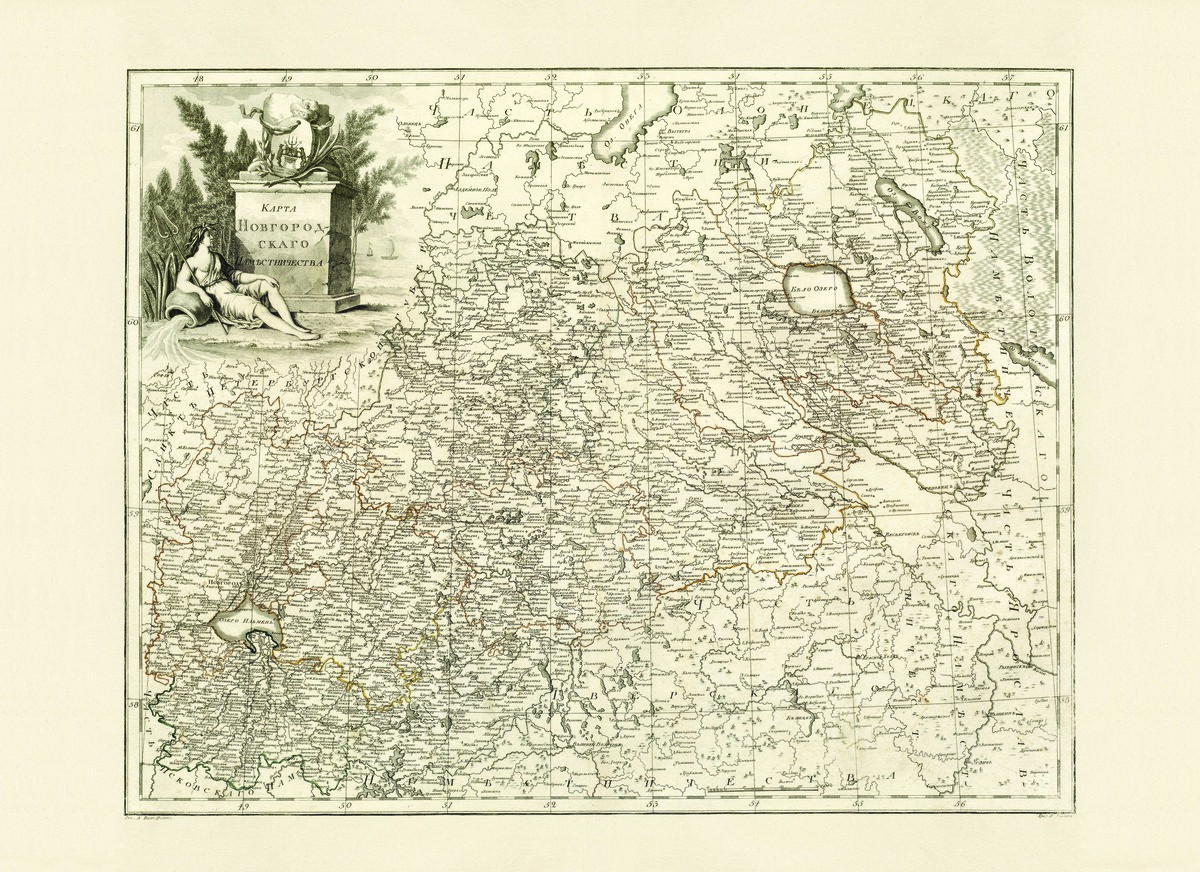 The map of
the Novgorod
Viceroyalty 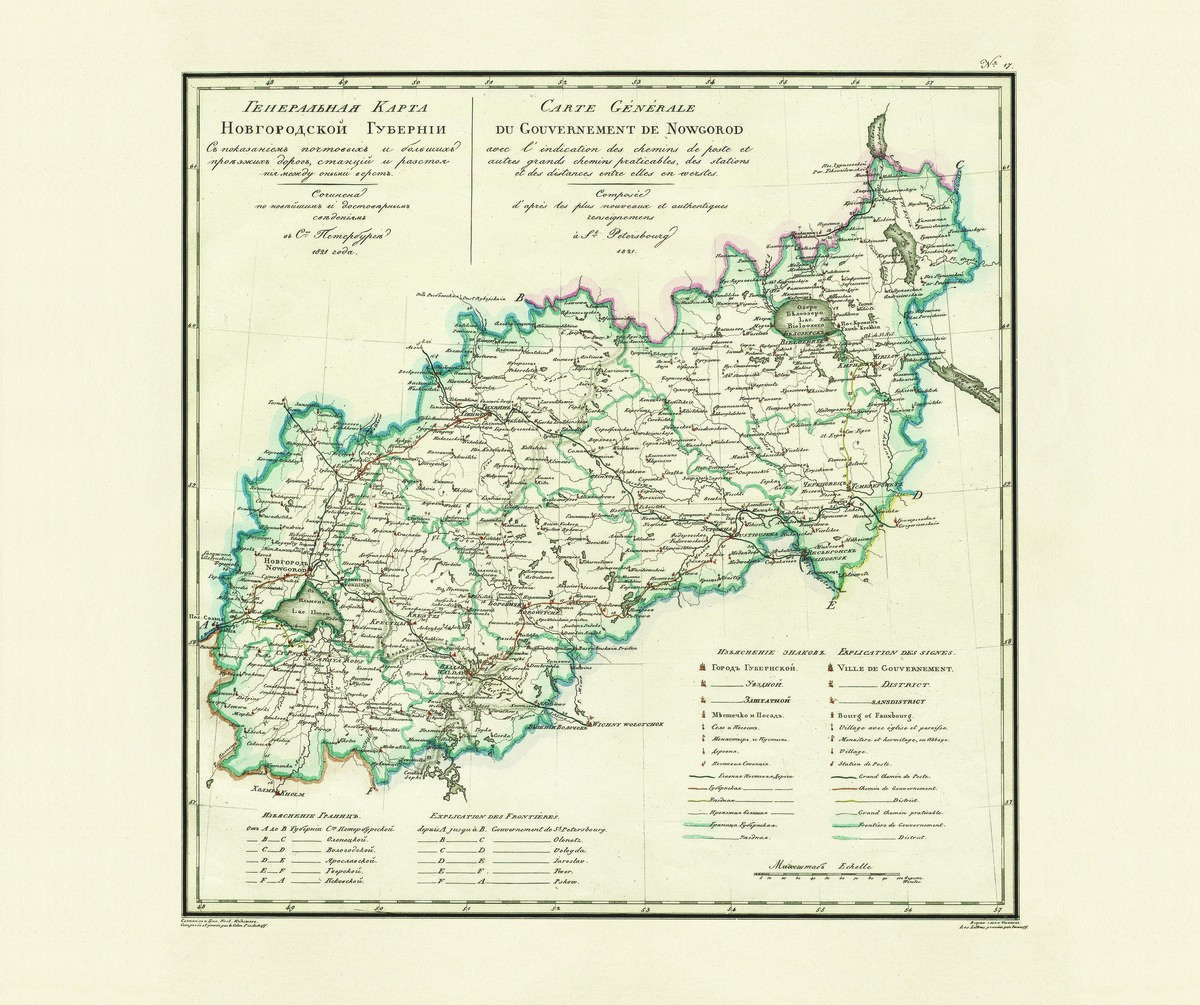 The general map
of the Novgorod Guberniya,
pointing out the post and great roads, postal stations and distances between them measured in versts

Full name of the atlas: The Geographical Atlas of the Russian Empire, the Kingdom of Poland, and the Grand Duchy of Finland, divided into guberniyas, in two languages, pointing out cities, towns, villages and all remarkable places, post and great roads, postal stations and distances between them and other villages measured in versts and miles, consisting of 70 sheets, with a General Map and a table of distances between the major cities by post roads, measured in versts. Compiled according to the latest and most authentic accounts for students in Russian Geography and for travellers to make itineraries. 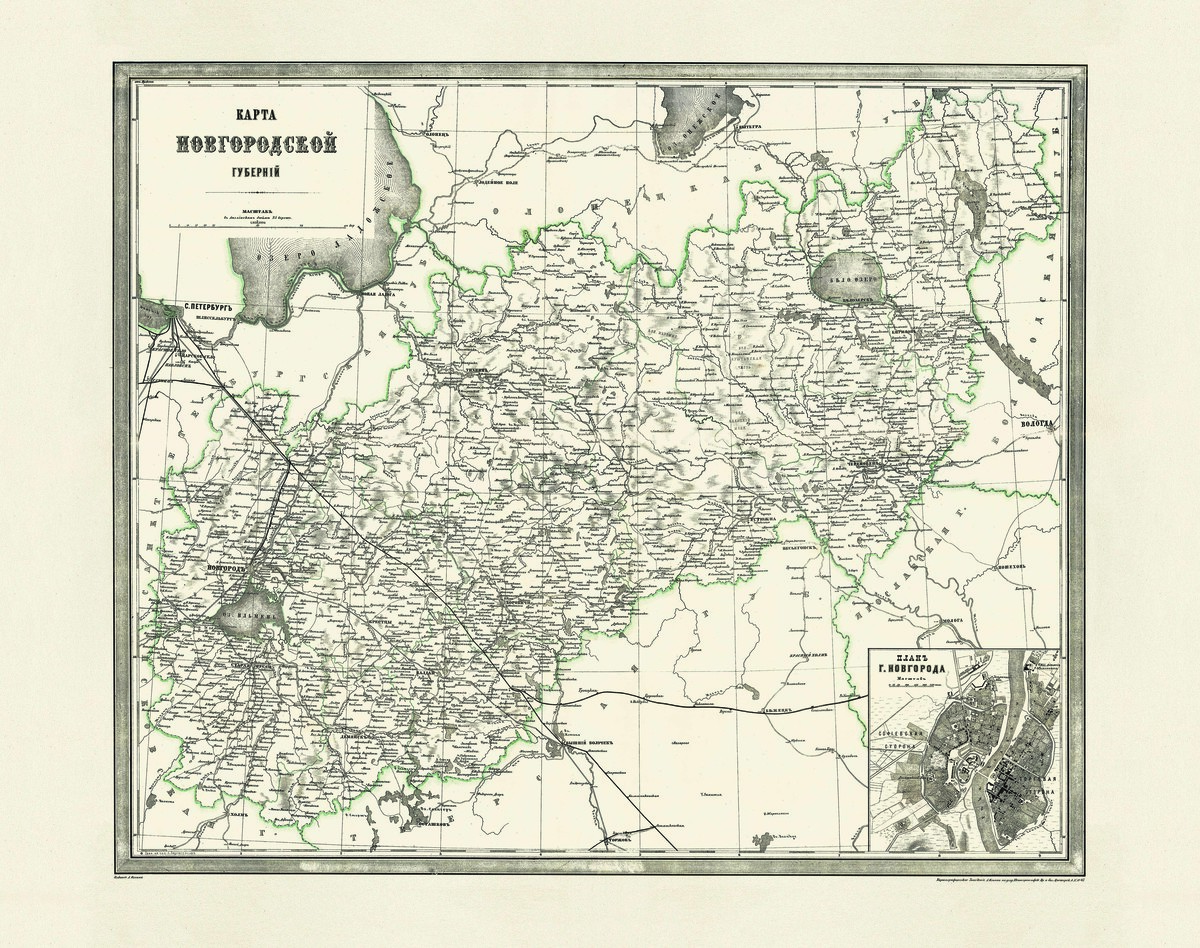 The map of the Novgorod
Guberniya 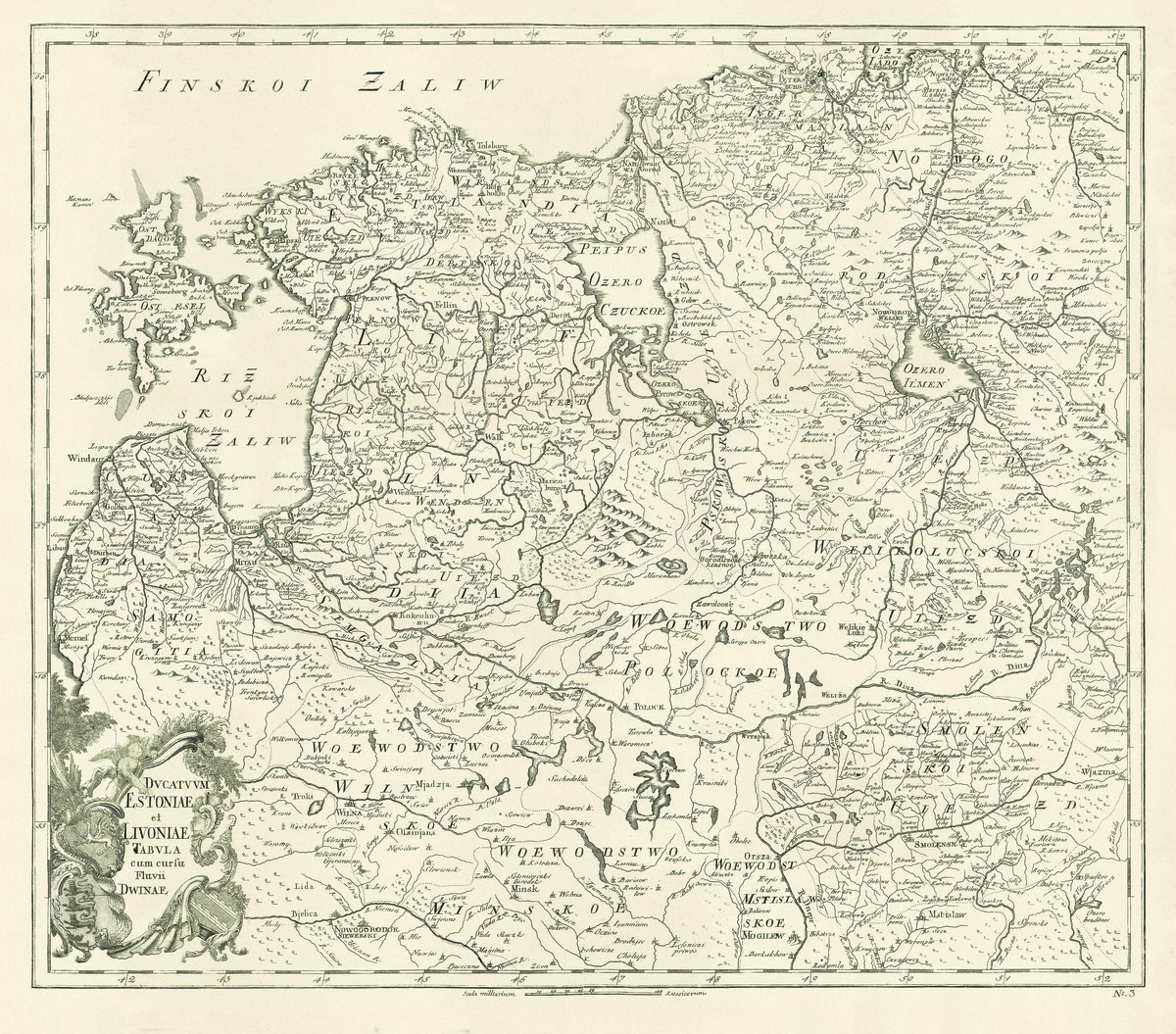 In the Russian version of the Atlas, the map is called the Plan of the Duchy of Estland and Livonia and the Course of the River of Dvina Map 3 from the Latin edition of the Russian Atlas 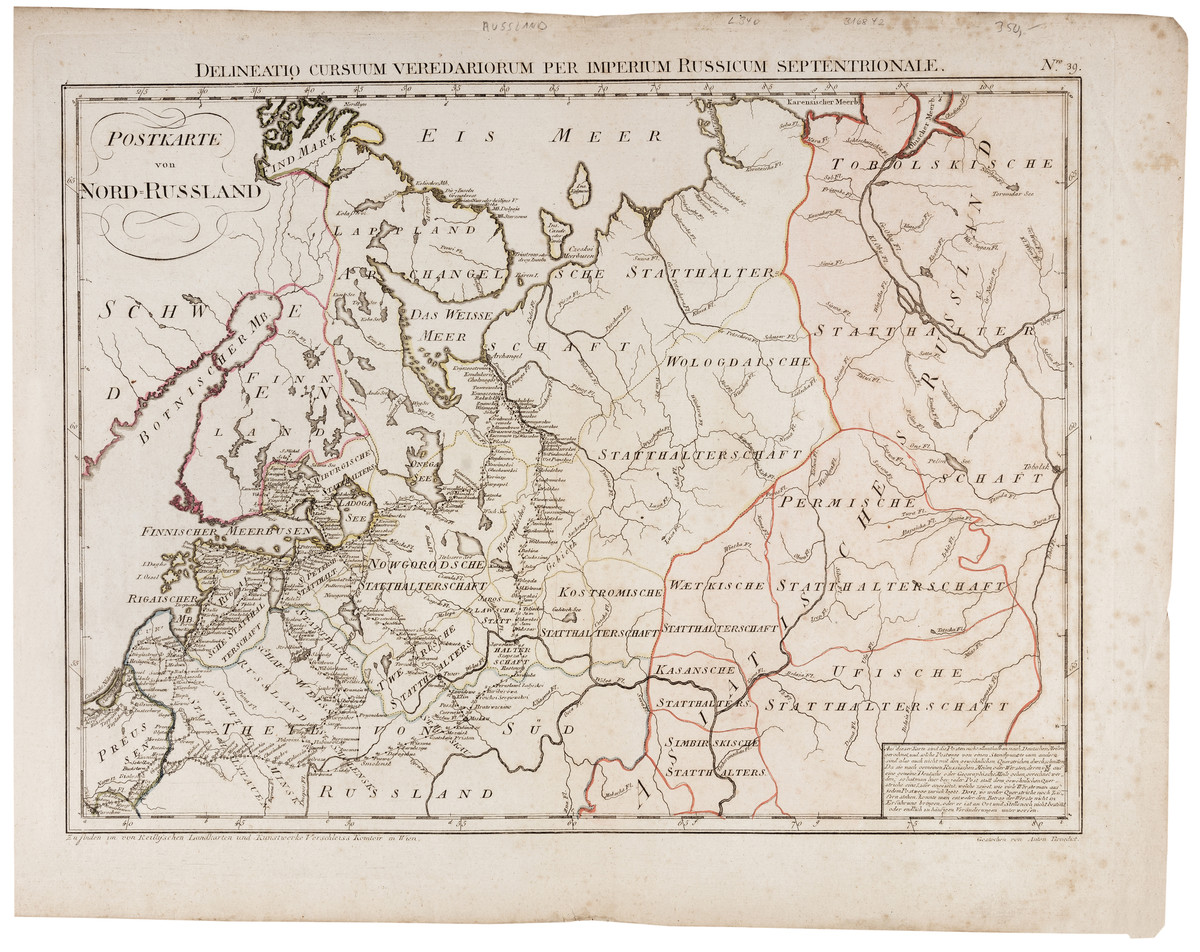 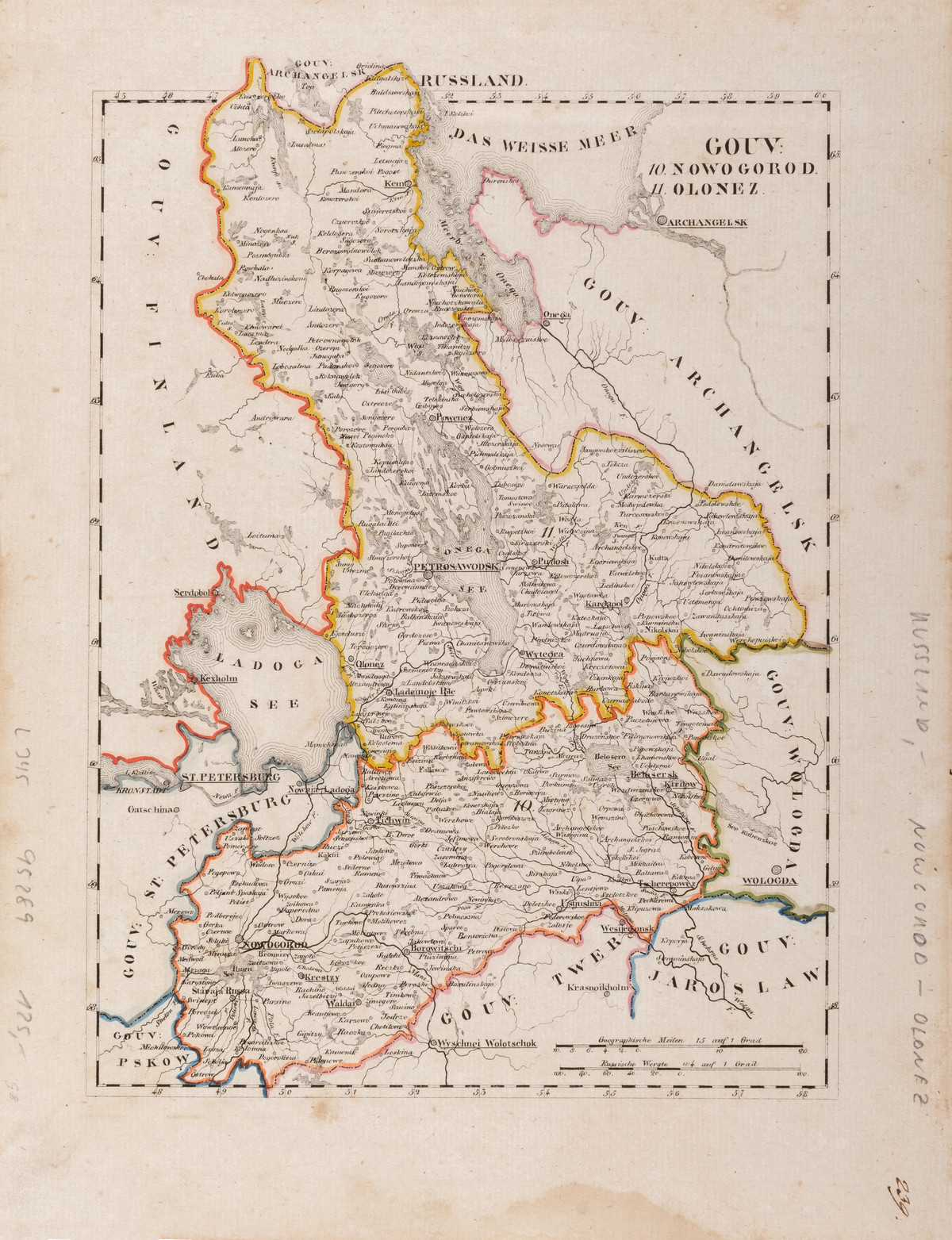 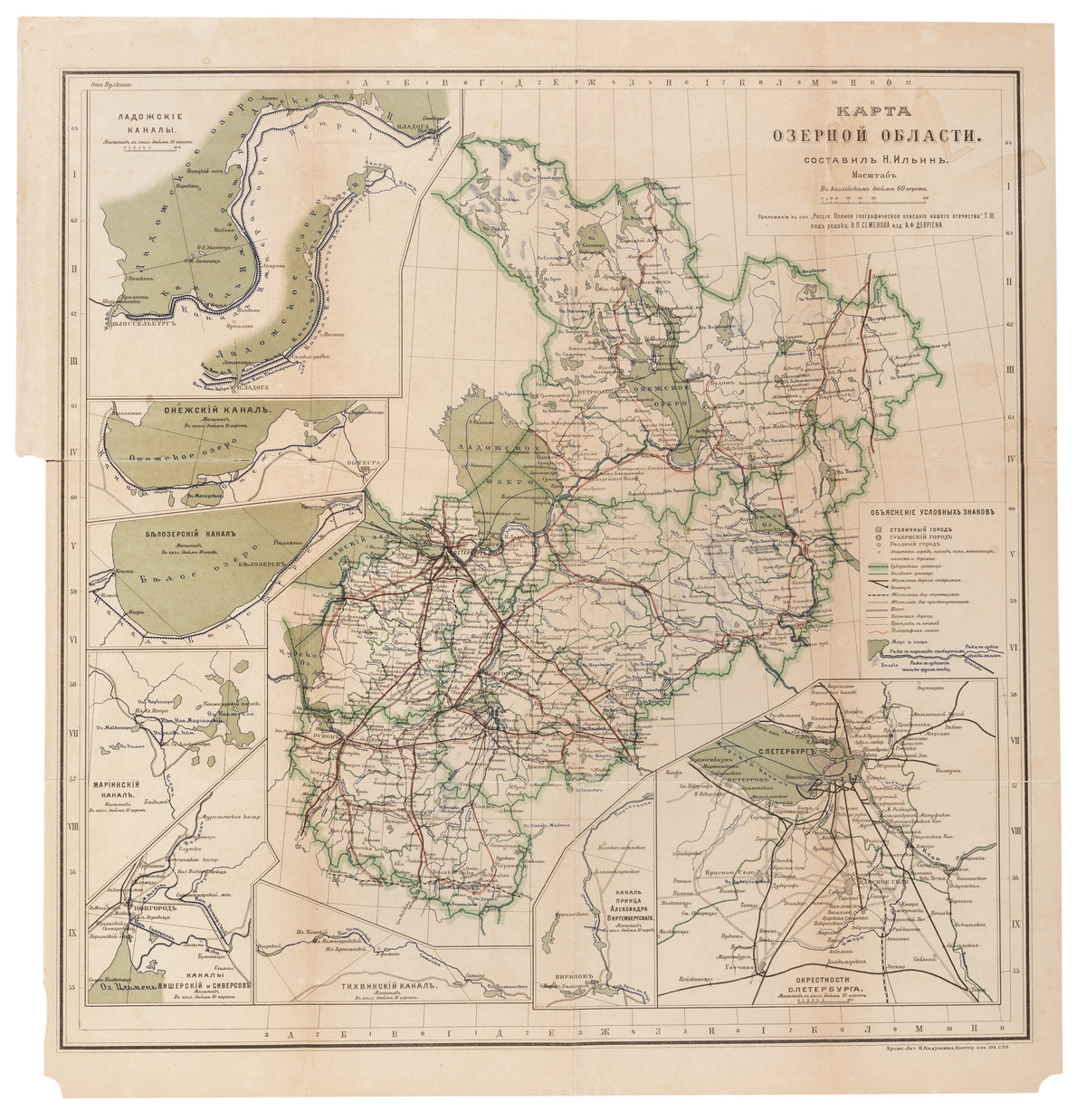 The map of the Lake Region

A reference map to Volume 3 Lake District from Russia. Full geographical description of our fatherland. Reference and travel book for Russian people, edited by Veniamin Semenov, under the general editorial control of Petr Semenov, Vice Chairman of the Imperial Russian Geographical Society, and Academician Vladimir Lamansky, Chairman of the Ethnography Department of the Imperial Russian Geographical Society. N. Ilyin, author of Chapter 3 Plants and Animals from Volume 3 Lake District 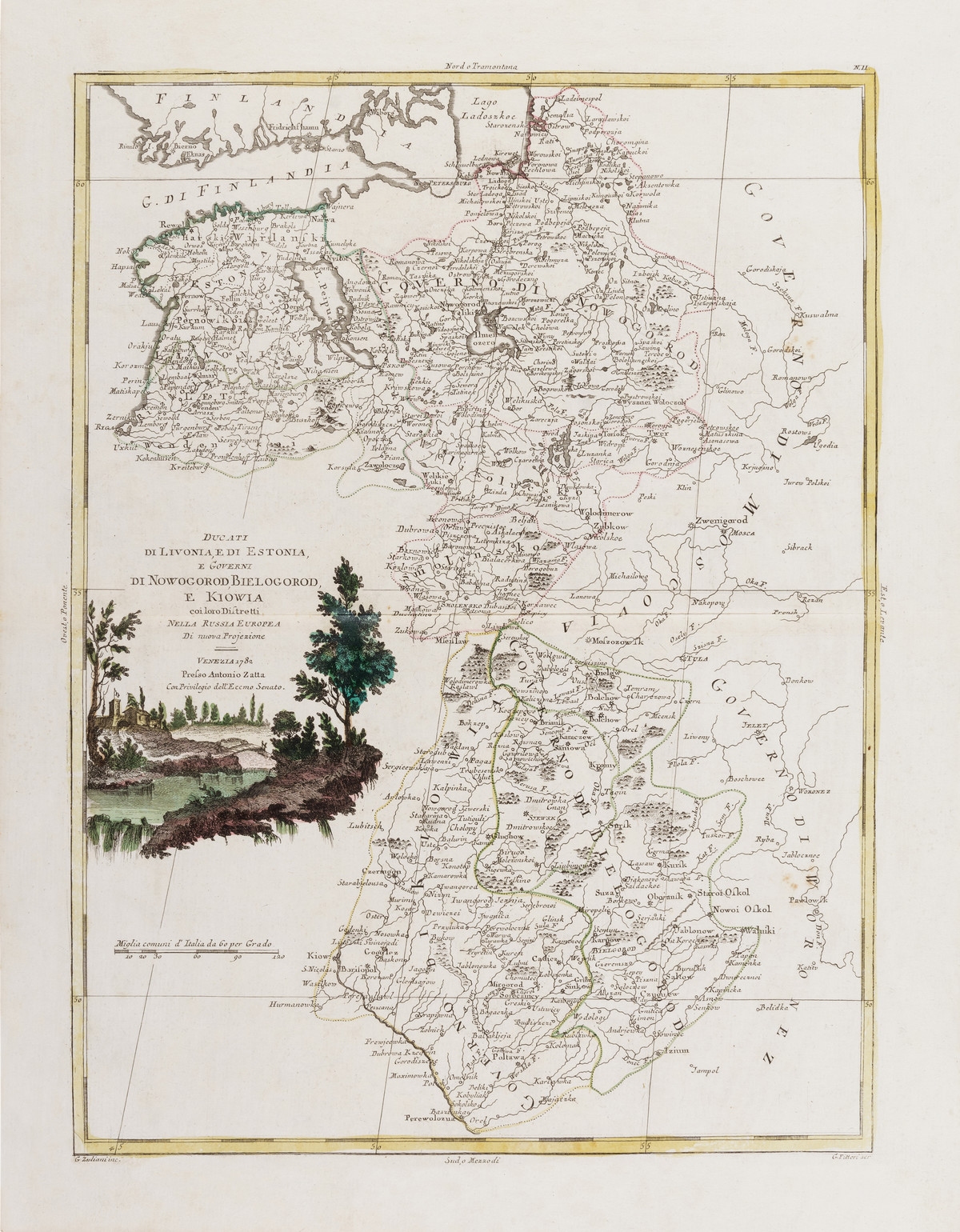 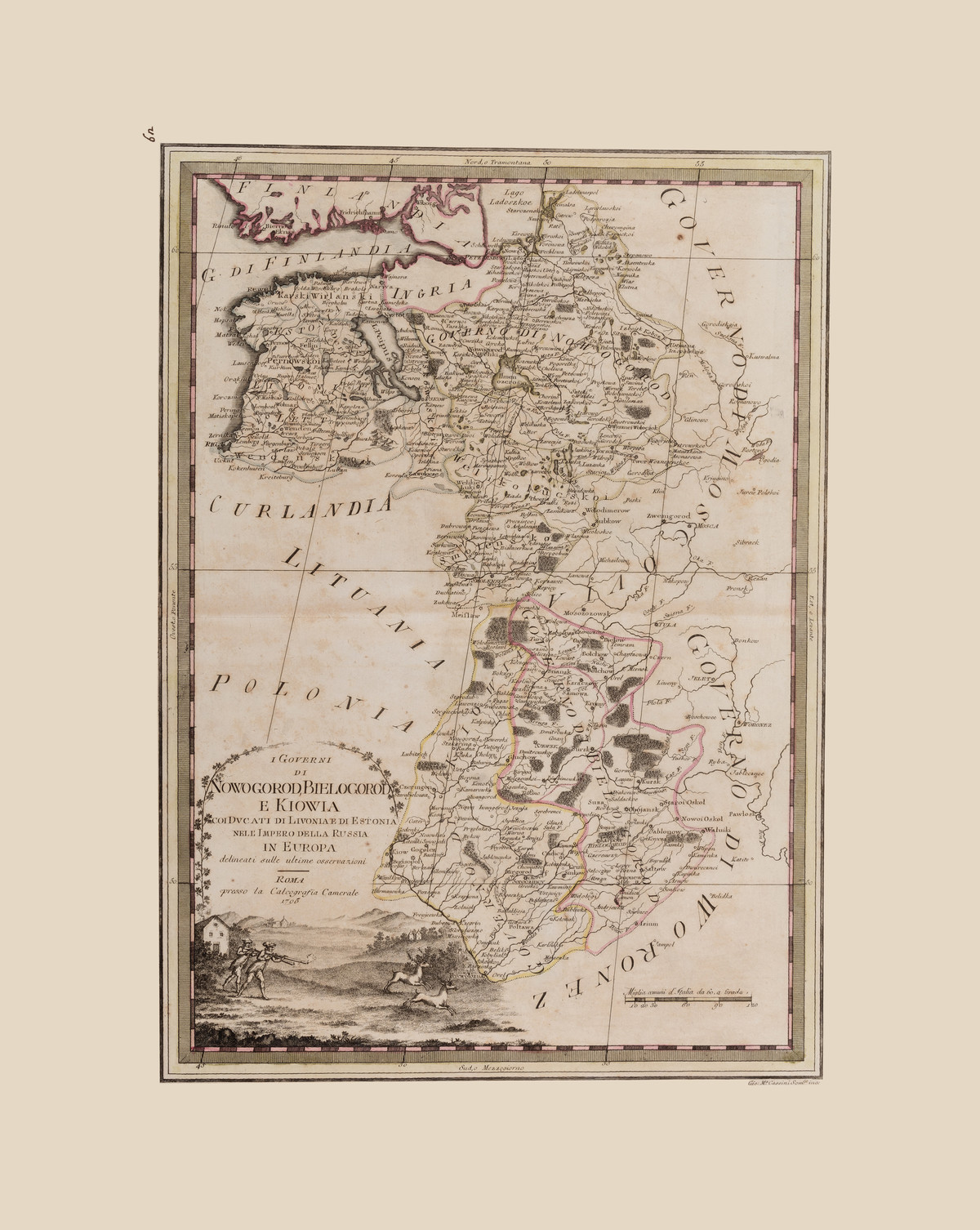 Drawn from recent
observations
A reprinted copy
of the map by Zatta
(No. 39)