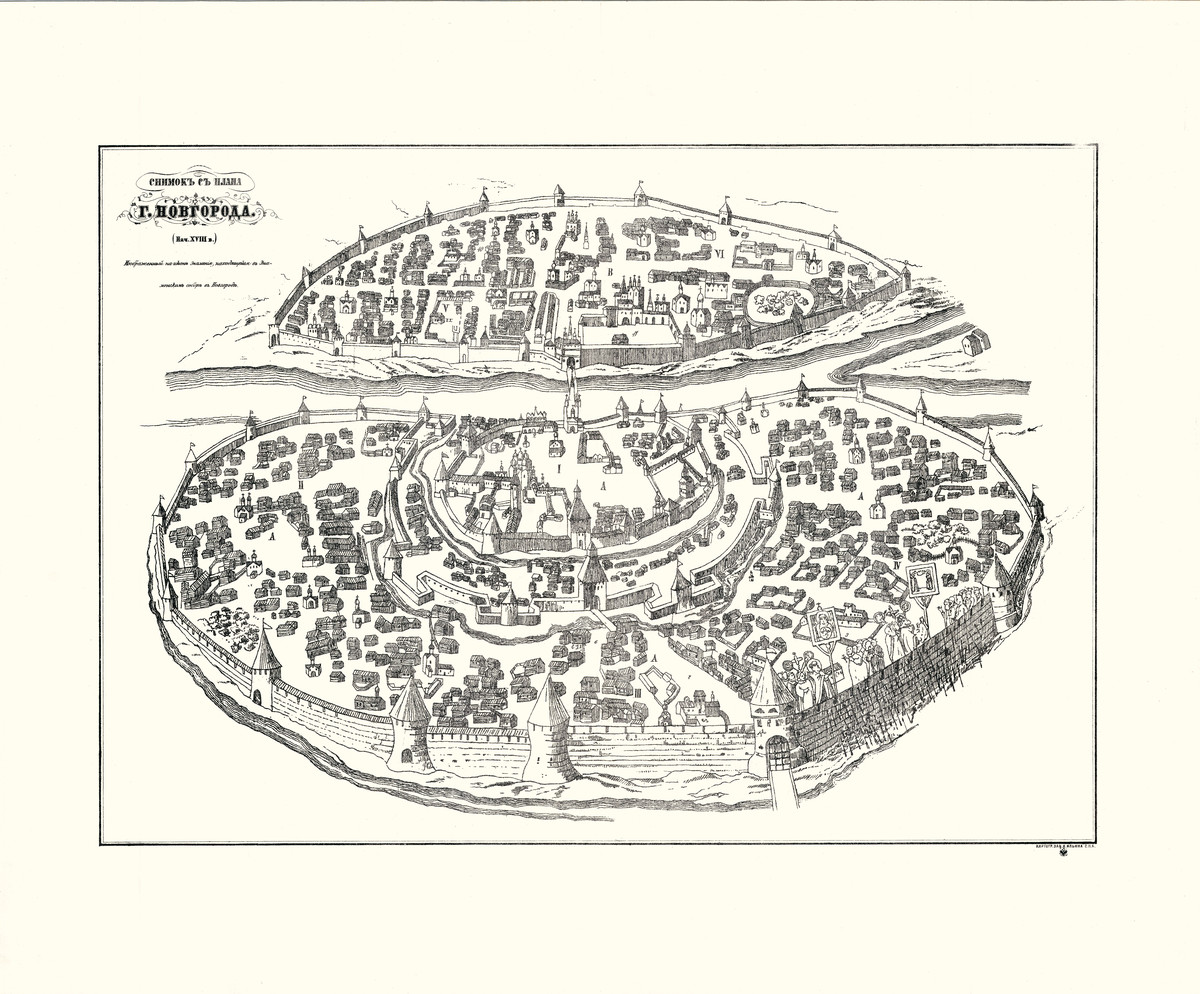 It was included in the Educational Atlas of Russian History drafted
and published by Professor
Yegor Zamyslovsky. Third edition. Cartographic Establishment
of Alexey Ilyin

By the middle of the 19th century, works on Novgorod’s history were beginning to focus more on scientific analysis of sources rather than their chronological recounting. For example, some of the studies of Novgorod’s Kremlin relied not only on drawings and plans, but also on its depictions in icons, which are at the junction of ancient Russian art and cartography. Researchers noted that many of the plans featured in the icons were made with high level of artistic mastery and historic accuracy.
Three types of icon plans and their copies are currently stored in Novgorod’s museums. These can be provisionally assigned to the Our Lady of the Sign, Michael the Archangel, and Vision of Sexton Tarasy types.

The plan from the Our Lady of the Sign icon offers a panoramic view of Novgorod at approximately a 60° angle. This effect is created by increasing the size of the five towers shown closest to the viewer. The size of the remaining towers and most other structures is about the same. The Our Lady of the Sign plan was created without a camera obscura, which was often used in Western Europe to draw city plans (for example, the view of Veliky Novgorod in the 1656 book by Adam Olearius). The plans feautured in Russian icons differ from Western European city plans-views by the type of panorama they offered, the degree of the angle under which objects are observed. 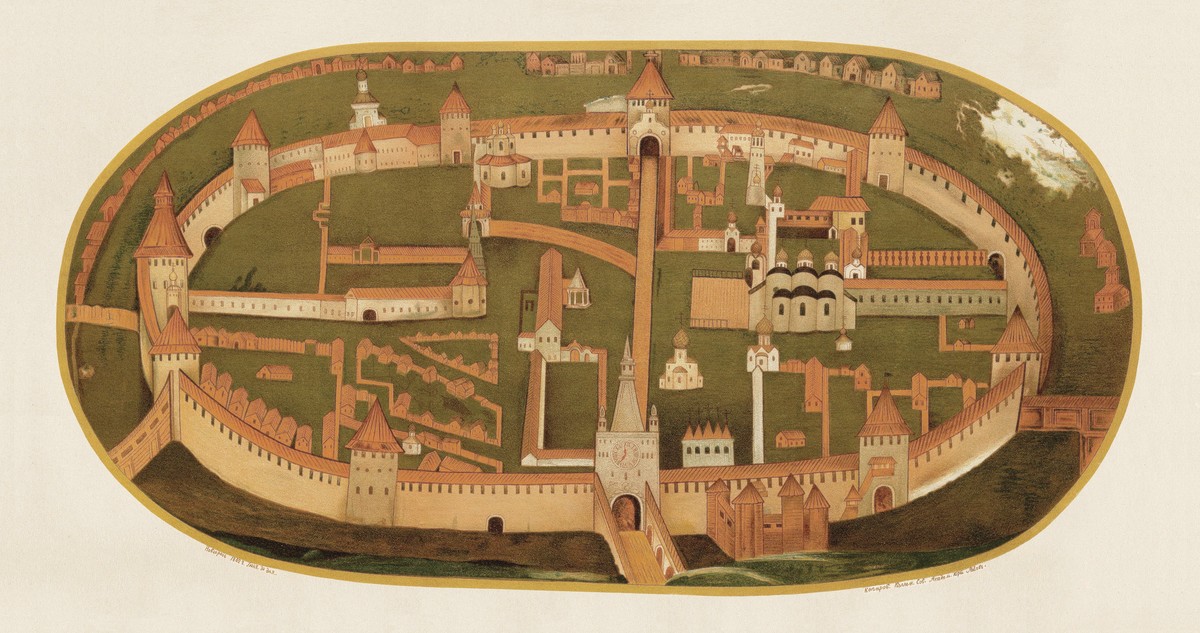 The plan was published in the book
The Novgorod Detinets as Featured in the Icon from the Mikhailovskaya Church by Pyotr Gusev. Special edition of the Bulletin of Archaeology
and History, Issue 22

The most well-known of the plans featured in Novgorod icons is the one from the Church of Michael the Archangel, also known as the Mikhailovsky plan It depicts Novgorod’s Kremlin, Detinets.
Vasily Peredolsky, a Novgorod historian, was among the the first researchers to study the Mikhailovsky plan. Regrettably, in his work on the history of Detinets he mistakenly dated it to the 15th century.
In early 20th century, the Mikhailovsky plan was studied by Pyotr Gusev, a prominent expert on Novgorod’s topography, history and culture. To determine the period when it had been created, Gusev examined multiple sources, including chronicles, scribe books, miniatures from the biographies of Saints Zosima and Savvatiy of Solovki, views of Novgorod drawn by Augustine Meyerberg in the 17th century, and Nicolaes Witsen’s prints.

In his book, he published a photo of the plan taken in 1859 by Yuri Lvov, an artist and member of the Russian Arts Academy. The photo was to be included in a publication whose release in 1862 was timed with celebrations of 1,000 years of Russian statehood. However, for some reason, it never came out of print. Later, a prominent historian, Dr Arist Kunik tried to publish the plan’s photo in the Izvestia Archaeologicheskogo Obshchestva (News of the Archaeological Society), but to no avail. Therefore, Pyotr Gusev’s Novgorod Detinets as Featured in the Icon from the Mikhailovskaya Church is credited as the first major scholarly work to publish the plan. 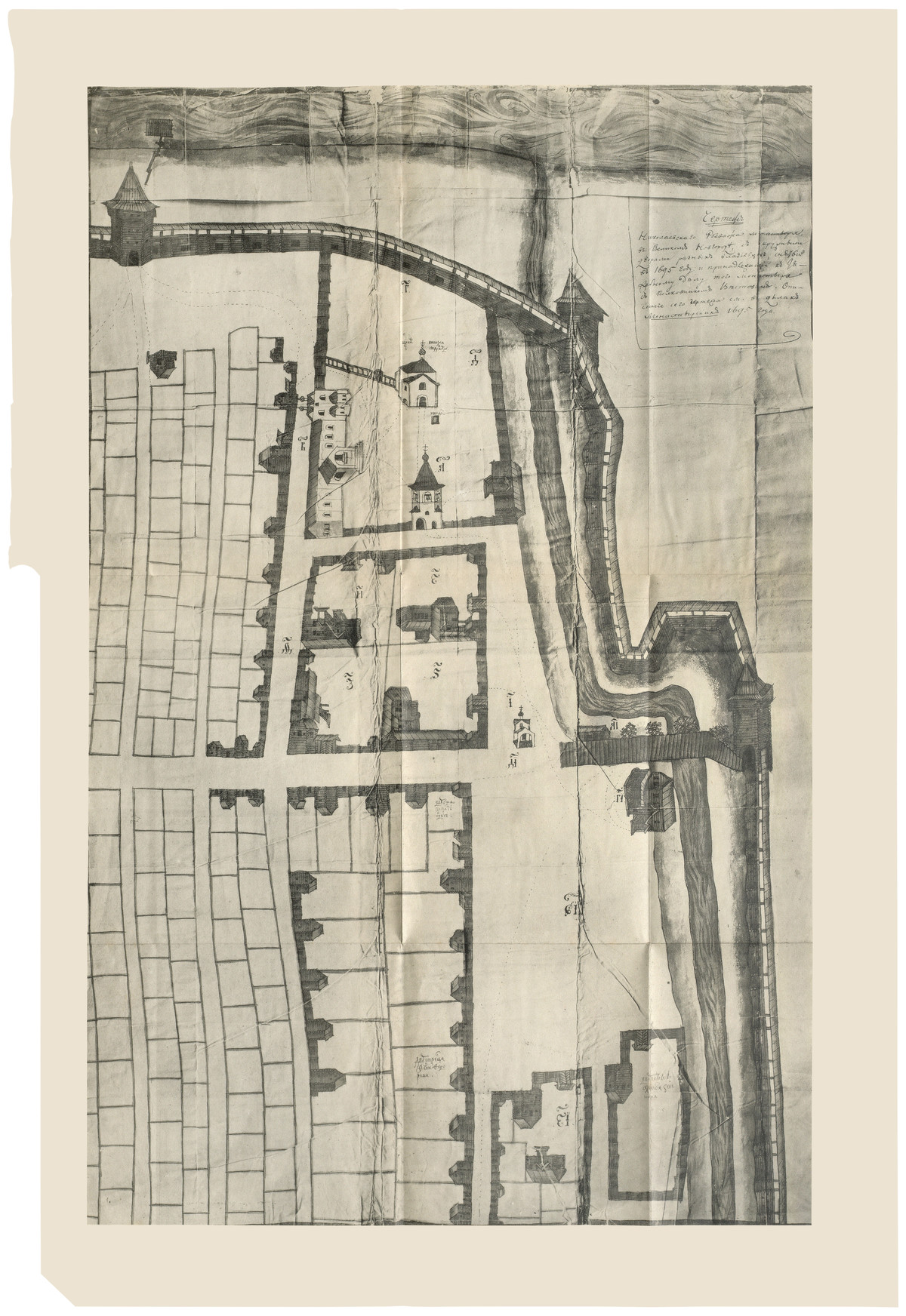 From The map of a part of Old Novgorod, late 17th century,
by Boris Grekov 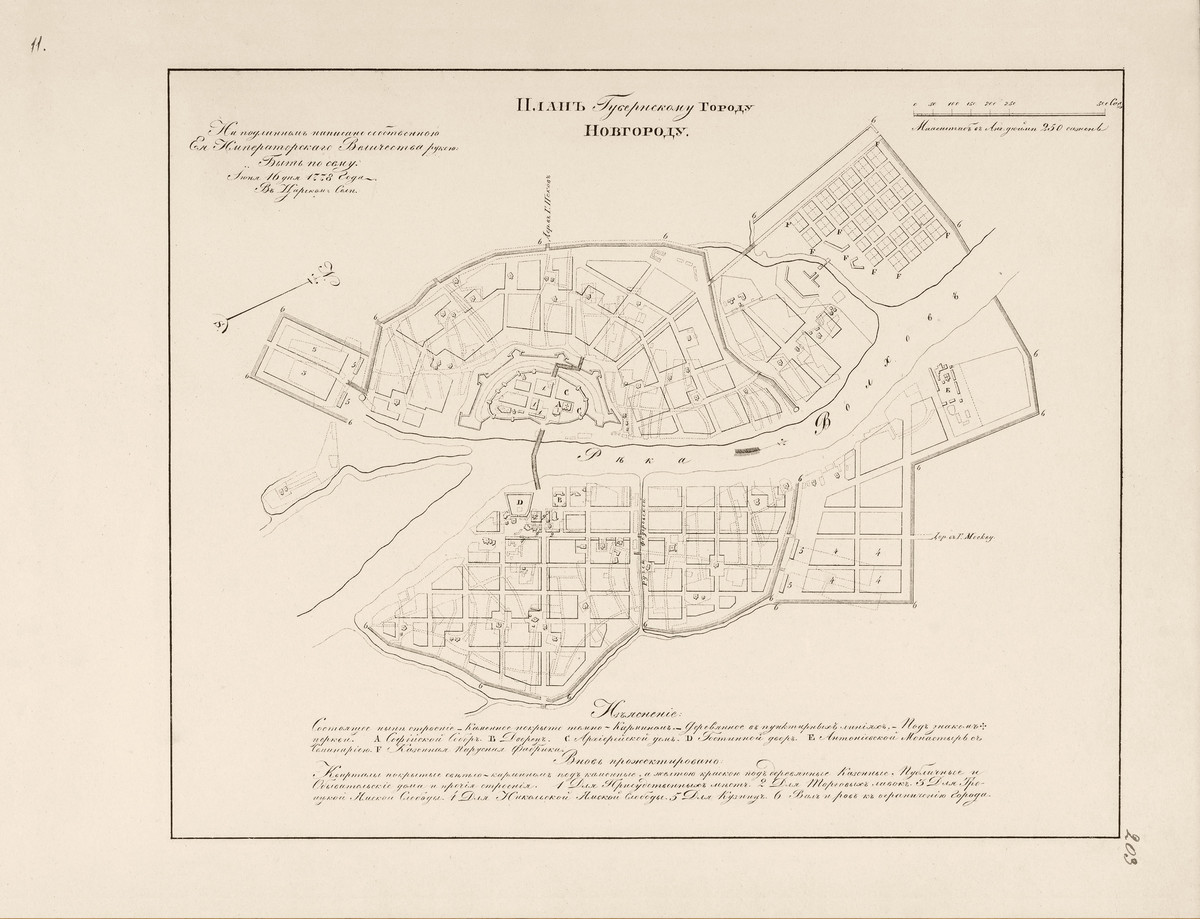 The map of the principal
city of Novgorod

Sheet 203 from the Annex Book of Drawings and Pictures (City Maps)
Part 2 of the Complete Collection of Laws of the Russian Empire. First Collection. St Petersburg, Printing House of the Second Section of His Imperial Majesty’s Own Chancellery 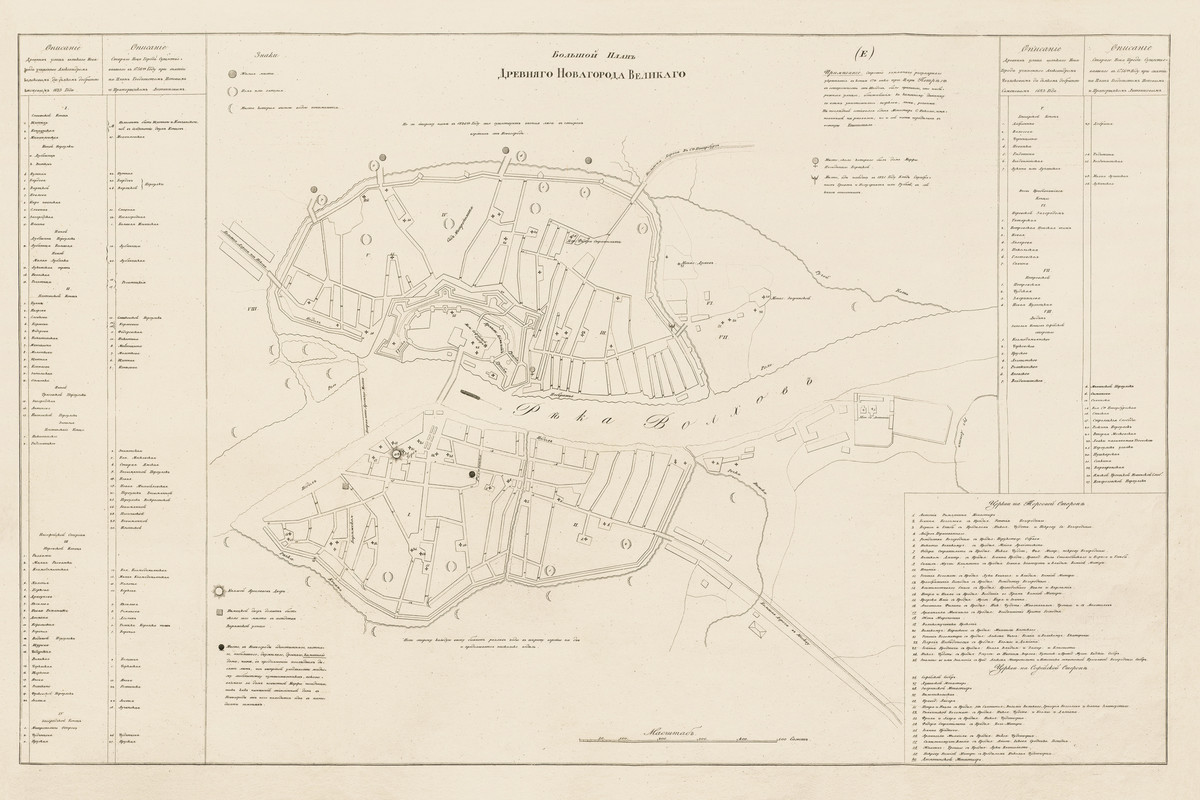 Oriented to the west
St Petersburg, 1828
Paper, lithograph
A copy

From Nikolay Muravyov’s A historical study on the antiquities of Novgorod, covering: 1) its silver coins: hryvna and half-hryvna or roubles; 2) its location, size, population and surroundings; 3) its fortifications, buildings, customs of residents, and government structures. With four separate drawings of these hryvnas and roubles. With a plan and description of ancient Novgorod. With a detailed Topographic map of Novgorod’s surroundings, published in the Military Printing House of His Imperial Majesties General Staff. From Nikolay Muravyov’s

A historical study on the antiquities of Novgorod, covering: 1) its silver coins: hryvna and half-hryvna or roubles; 2) its location, size, population and surroundings; 3) its fortifications, buildings, customs of residents, and government structures. With four separate drawings of these hryvnas and roubles. With a plan and description of ancient Novgorod. With a detailed Topographic map of Novgorod’s surroundings, published in the Military Printing House of His Imperial Majesties General Staff. 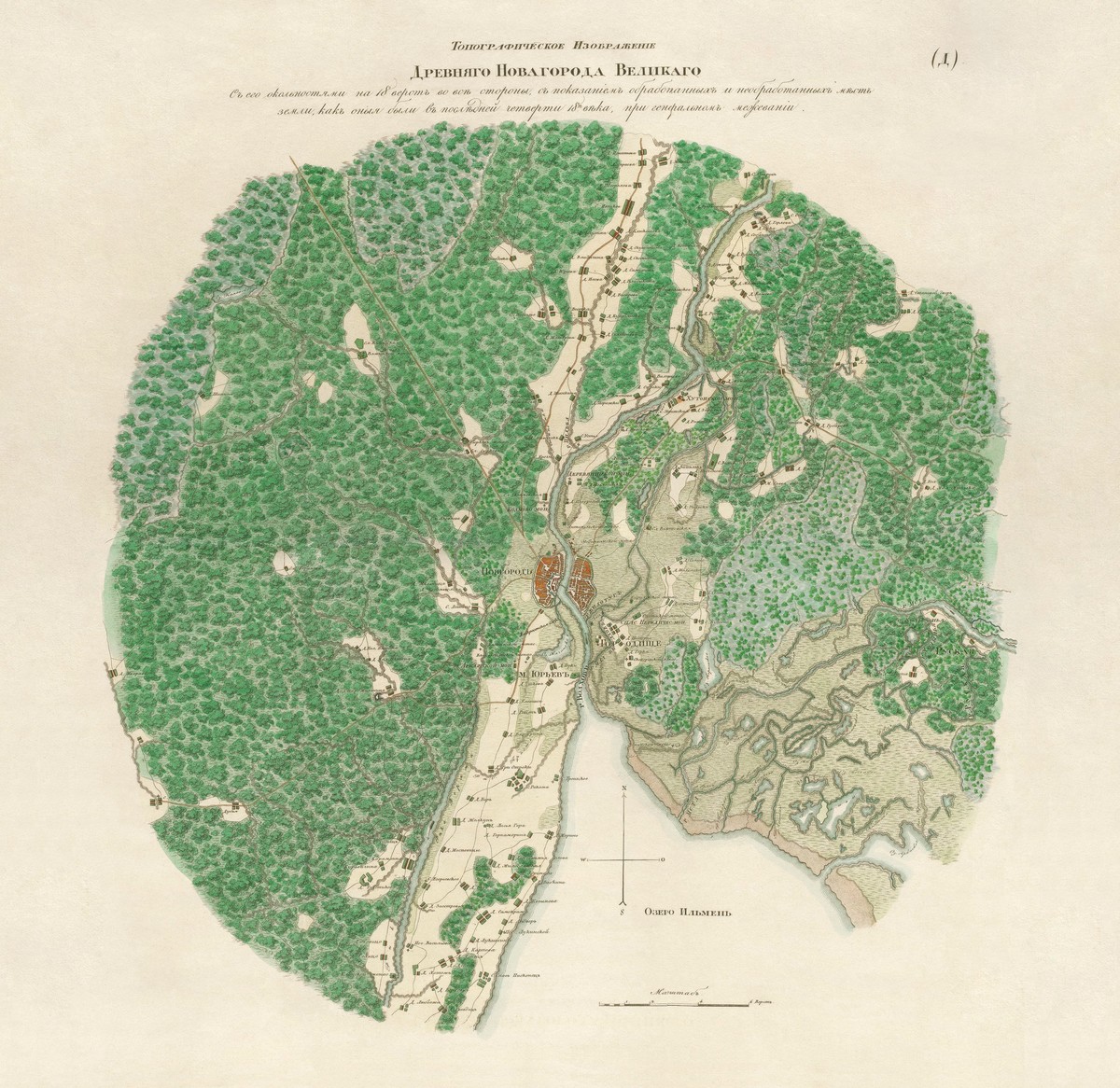 A topographic plan of
Ancient Veliky Novgorod
and its surroundings stretching for 18 versts in all directions, showing the cultivated and uncultivated land as per the General survey of the last quarter of the 18th century.

From Nikolay Muravyov’s A historical study on the antiquities of Novgorod, covering: 1) its silver coins: hryvna and half-hryvna or roubles; 2) its location, size, population and surroundings; 3) its fortifications, buildings, customs of residents, and government structures. With four separate drawings of these hryvnas and roubles. With a plan and description of ancient Novgorod. With a detailed Topographic map of Novgorod’s surroundings, published in the Military Printing House of His Imperial Majesties General Staff. 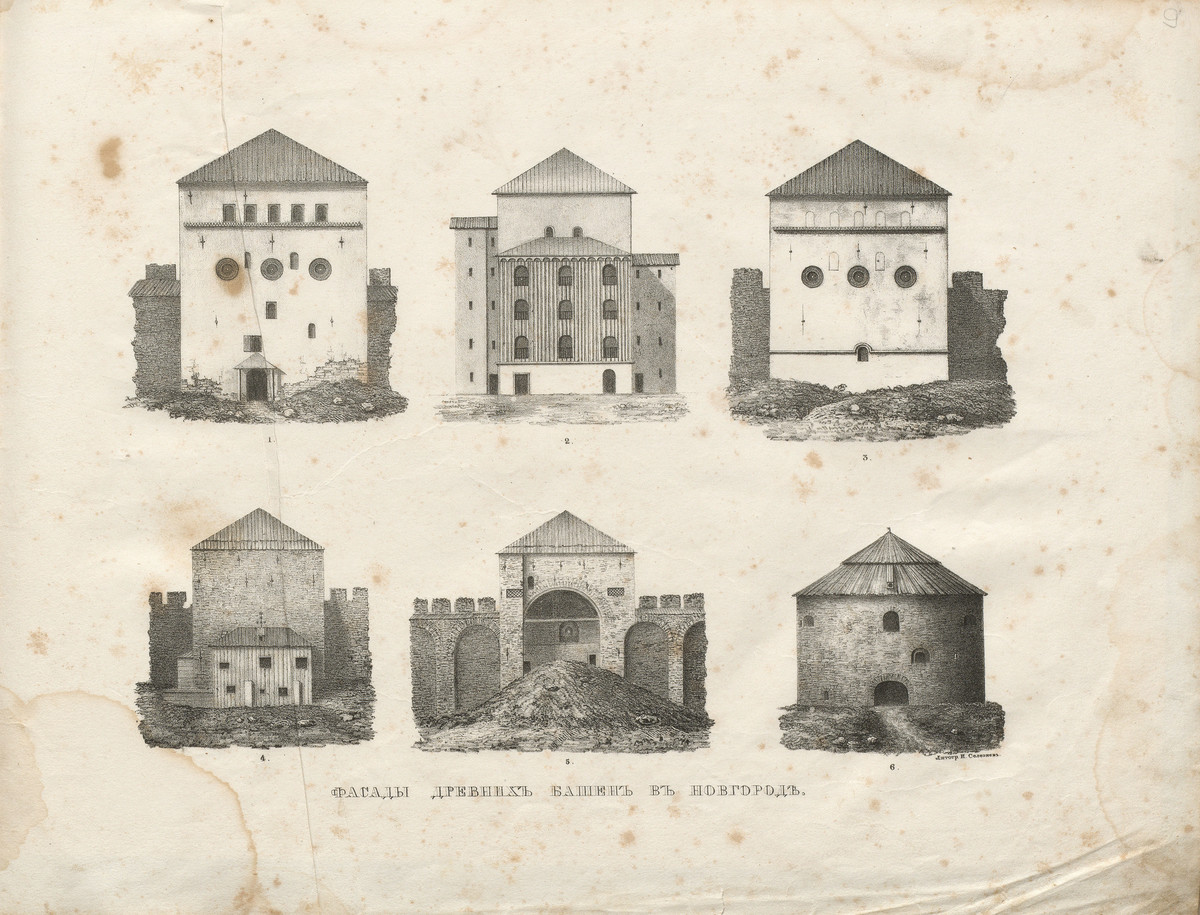 The atlas to materials
on statistics of the Russian
Empire 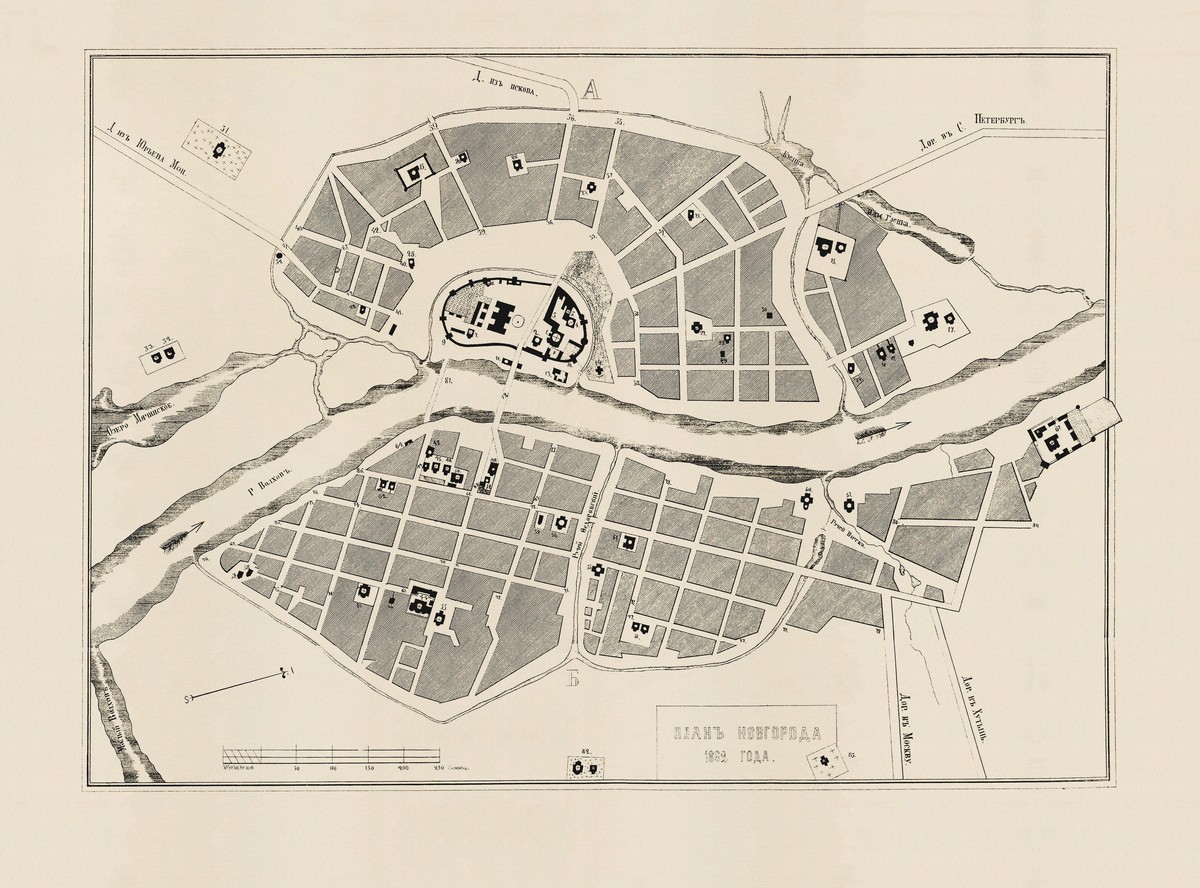 From the Guide of Veliky Novgorod
Complete with a Novgorod Menologium, Compiled for Pilgrims by Count Mikhail Tolstoy

The Guide was drafted by Count Mikhail Tolstoy (1812–1896), a church writer, historian and archaeologist.
In 1860, Tolstoy embarks on one of his major works – a series of books on Russian Shrines and Antiquities. The third book in the series, Shrines and Antiquities of Veliky Novgorod, covers the historical and religious monuments of Novgorod.
Tolstoy relies on a large volume of documents and chronicles to describe the main shrines and monasteries of Novgorod, including the Antoniev Monastery, the Yuriev Monastery, the Khutyn Monastery, and others.
The book tells the reader about ancient church items stored in monastery and church sacristies, and briefly describes the most important icons.

Tolstoy’s work was reviewed by Archpriest Pyotr Delitsin (1795–1863), representing the Moscow Theological Academy. A renowned theologian, mathematician, translator, and member of the Religious Censorship Committee, Delitsin assisted and supported the author as he edited and reviewed Tolstoy’s book. With all probability, Delitsin was the one to suggest that Tolstoy publish the Guide of Veliky Novgorod Comlete with the Novgorod Menologium, as an abridged version of his larger work.
The Guide provides information on when the monuments were built and shares interesting facts about icons and church antiquities. It was created as a reference book for pilgrims and admirers of Novgorod antiquities. The plan of Novgorod was reprinted unabridged and could be used both with the book and the Guide. 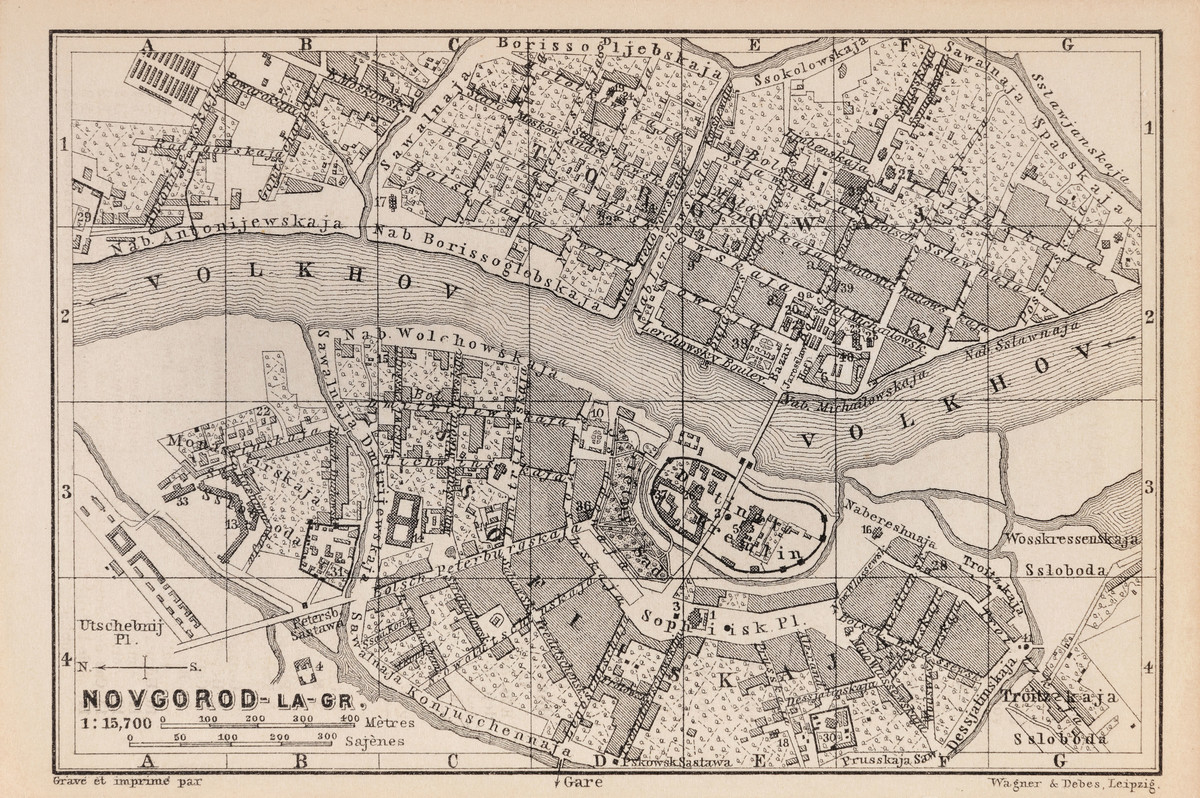 Karl Baedeker revolutionised the concept of travel guide, and is considered one of the pioneers of international tourism industry. Baedeker’s became the world’s most trusted and popular travel guide. Since 1846, Baedeker’s travel guides had a distinctive branded design – a pocket-size book with a red hard cover.
The plan showed Novgorod within the boundaries of Okolny Gorod and the adjoining slobodas (settlements) of Voskresenskaya, Troitskaya, and Monastyrskaya on the Sofiyskaya Side and Nikolskaya on the Torgovaya Side. It included 41 sites. Sufficiently detailed, the plan was aimed at foreign tourists and used an alphanumeric grid to help them find their way around the city. The guide provided a description of the sites included in the plan.

In Novgorod, foreigners were most impressed by the beauty of the city’s churches and monasteries. They also noted that churches and monasteries were the best maintained buildings in Novgorod. The most popular tourist attractions were the Cathedral of St Sophia and the Antoniev Monastery.
Baedeker’s travel guides were in high demand among foreign tourists planning a trip to Russia. 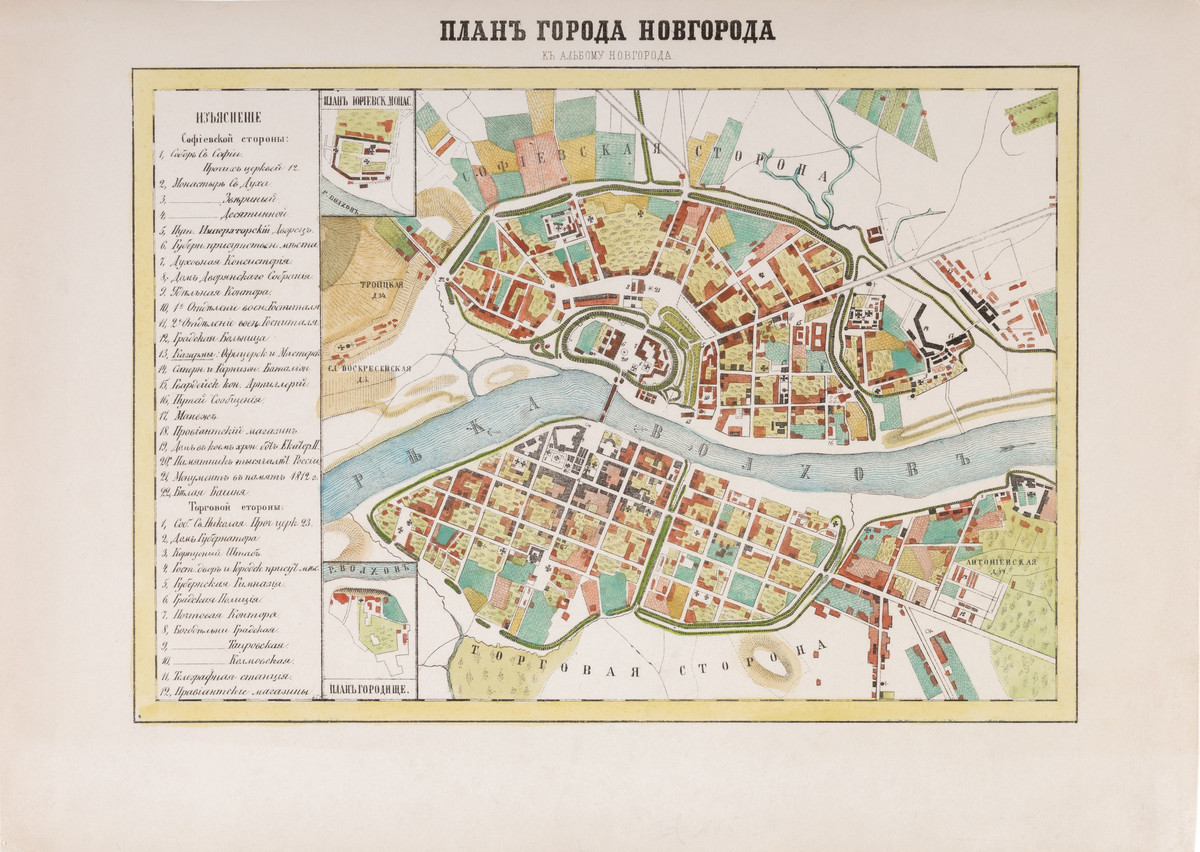 The map of the city of Novgorod.
Annexed to the Novgorod album

The city map from Art Book
with Views of Novgorod 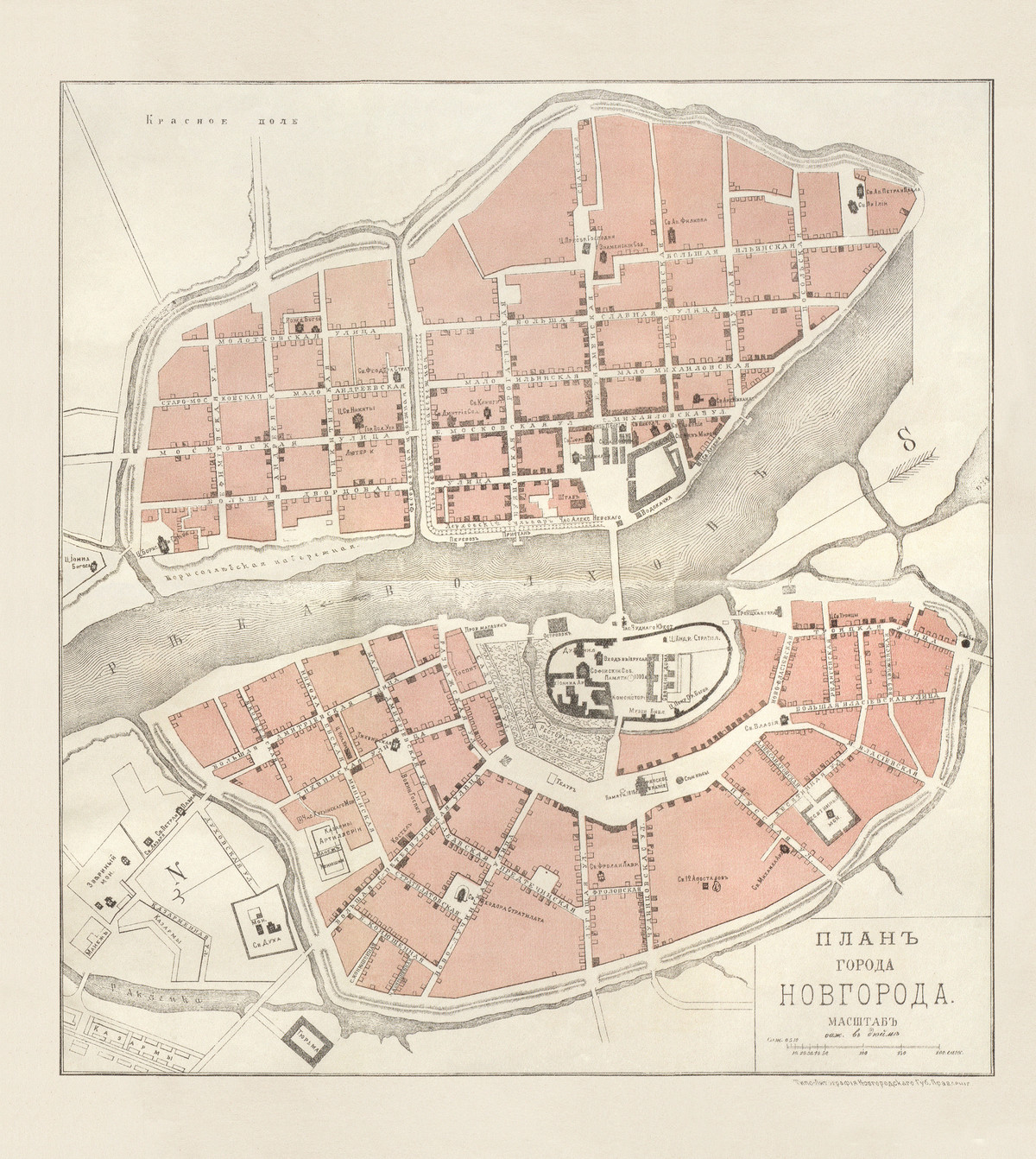 From the Novgorod Travel Guide
by Vasily Laskovsky published by the Novgorod Society for Admirers of Antiquity, printed at the Novgorod. Provincial Printing House.

Vasily Laskovsky (1845–1909) was a local history expert and researcher of Novgorod antiquities. In 1884–1894 he served as senior officer for special assignments under Novgorod’s Governor Alexander Mosolov and worked as Secretary of the Provincial Statistical Committee. In 1888–1891, Laskovsky served as Chairman of the Zemstvo Administration in Cherepovets, headed the Novgorod Museum of Antiquities, and was a member of the Novgorod Society for Admirers of Antiquity. From 1894, he was the editor of the Pamyatnaya Knizhka, the official reference book of the Novgorod Guberniya. He compiled the Novgorodika bibliographic dictionary, headed the special commission on waqfs in Simferopol in 1894–1904. After returning from Crimea, Laskovsky focused on drafting a travel guide for Novgorod.

The travel guide remains very helpful to date. It briefly describes all attractions located along the Volkhov River as it flows into Novgorod and provides a detailed description of Novgorod’s monuments, the Museum of Antiquities, and the Kremlin with all of its major buildings, walls and towers. In addition, it offers information on all important churches, monasteries, sites and buildings in Novgorod and its environs. The travel guide includes several indices and a plan of Novgorod. Vasily Laskovsky dedicated the book to the memory of Alexander Mosolov (1844–1904), the Governor of Novgorod in 1883–1894, who contributed greatly to the study of Novgorod’s history.
Laskovsky completed the work inmanuscript, but died before it came out of print. The travel guide was very popular, and was reprinted in 1913. 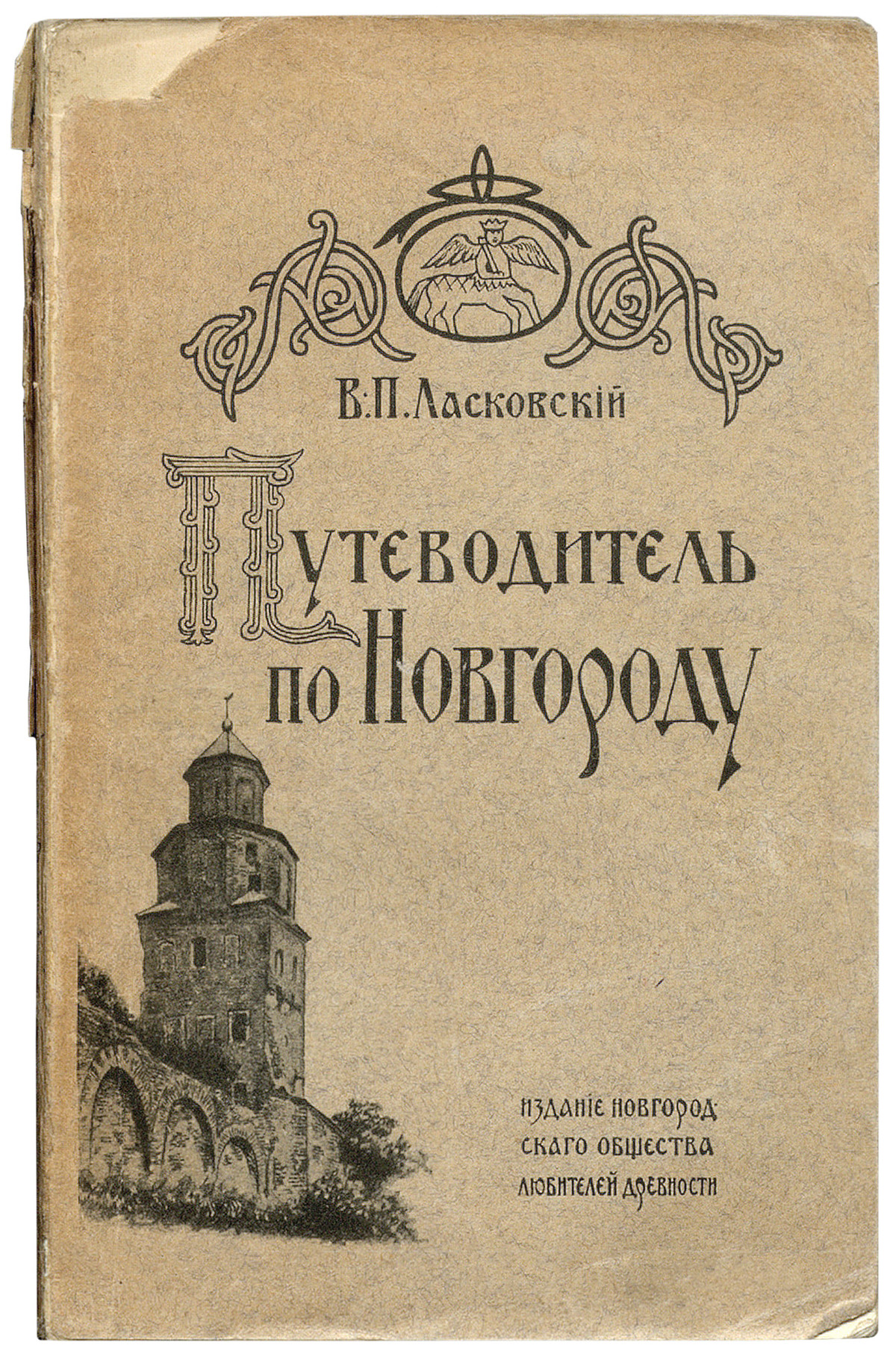 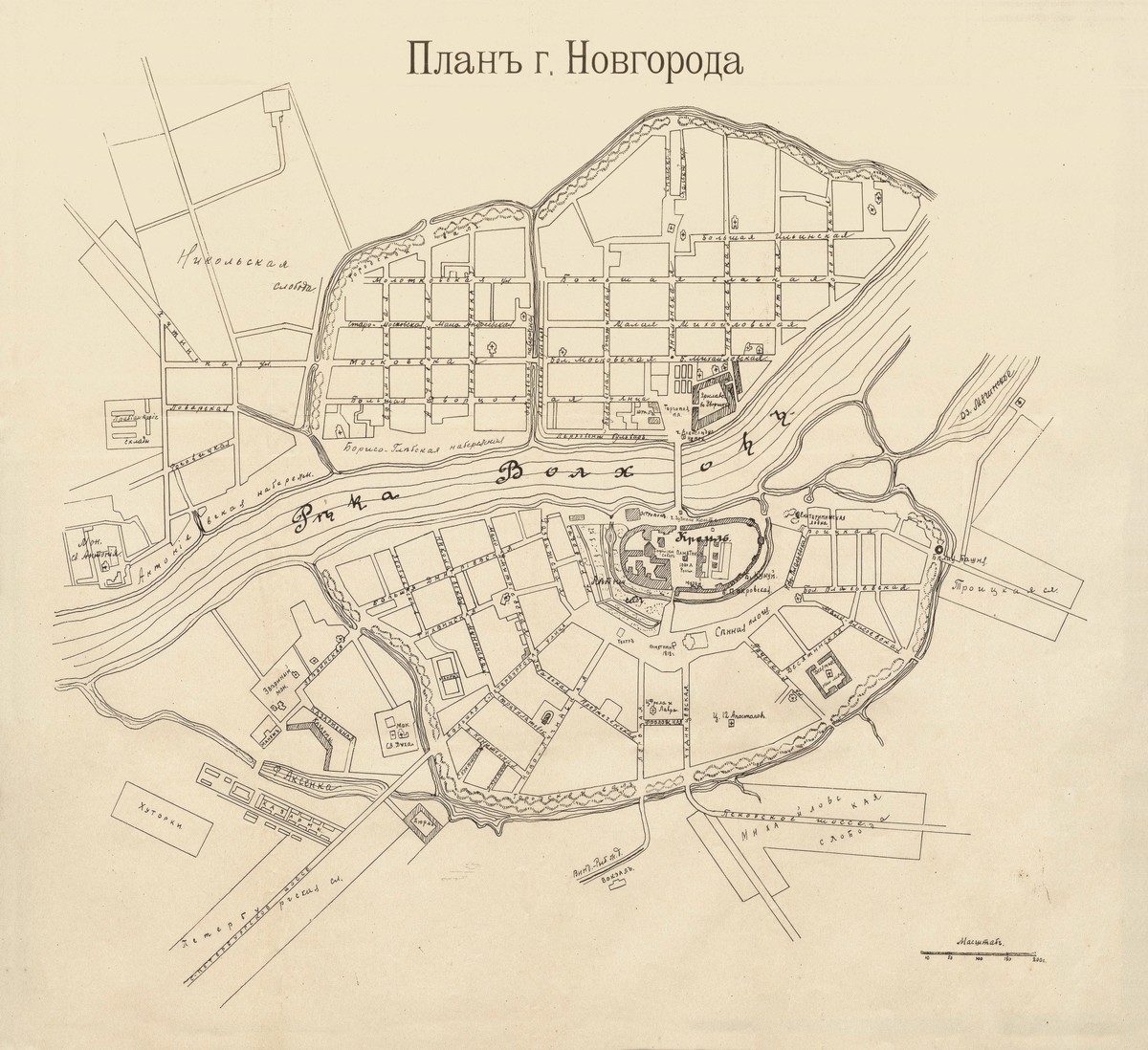 From Traveller’s Guide
to Novgorod and Staraya Russa, compiled by Petr Sobolev and
published by Boris Suvorin 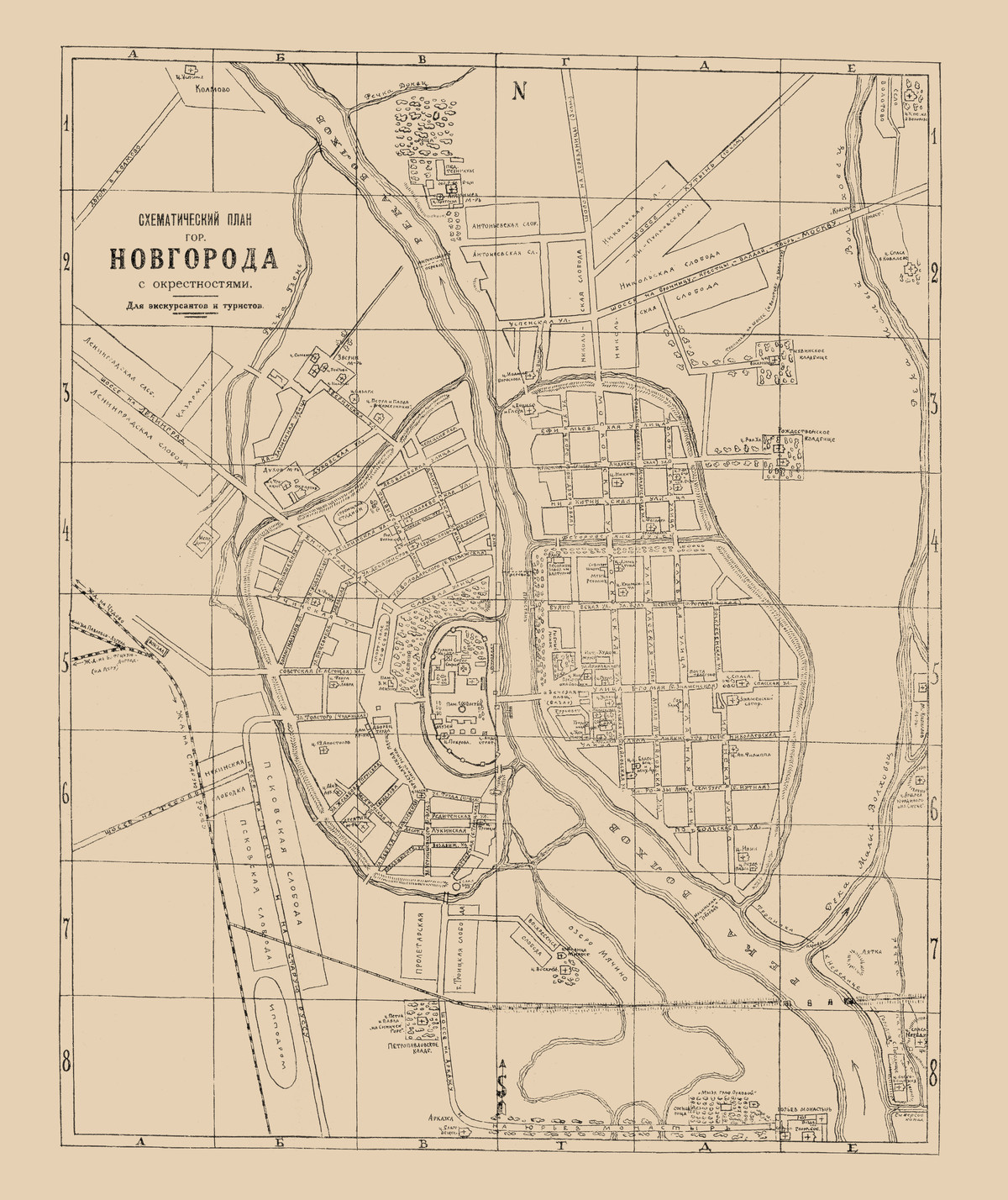 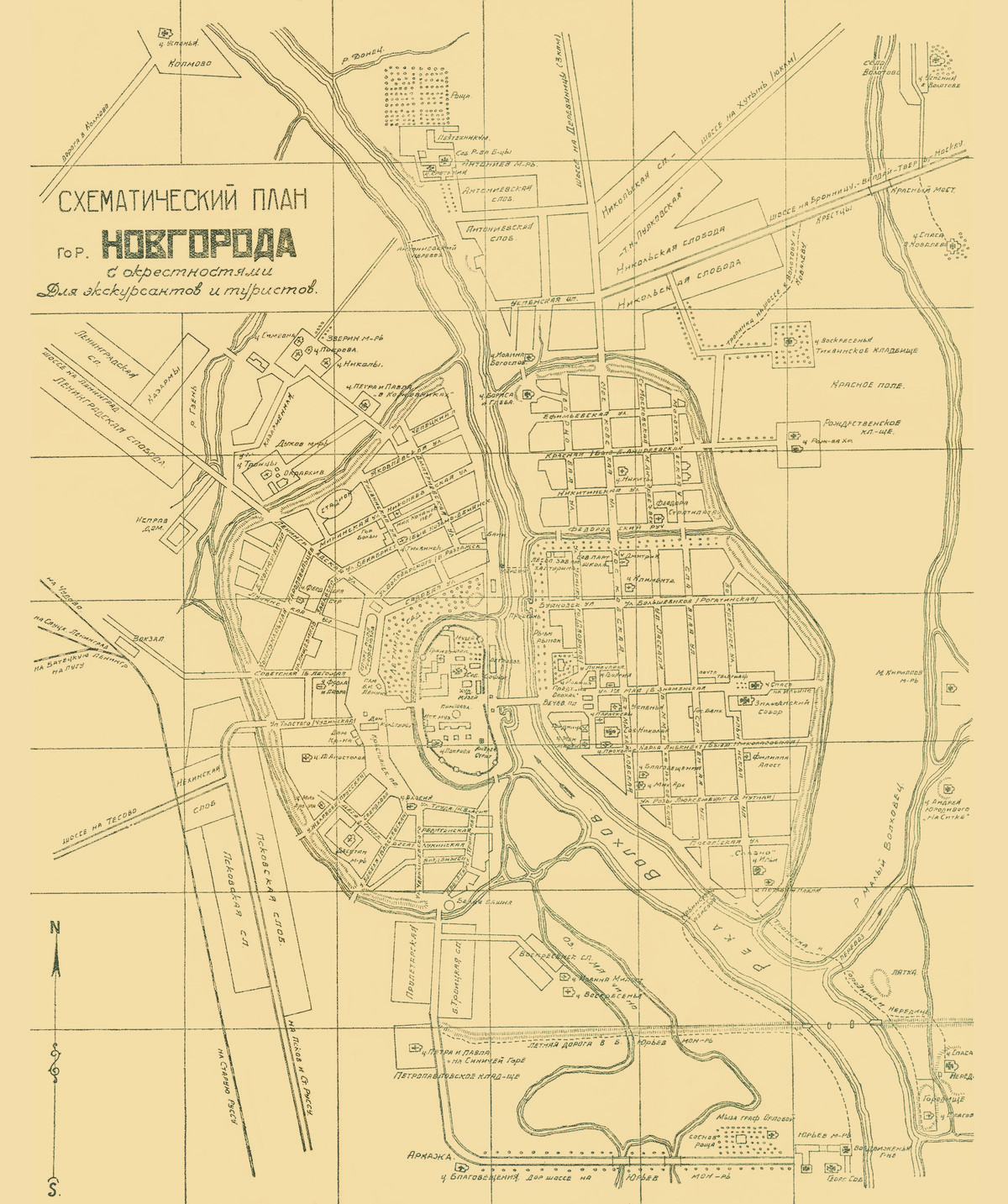 A schematic plan of
Novgorod and its surroundings.
For sightseers and tourists

From the travel guide of the Novgorod State Museum. A plan of the City-Museum with an index.

Following the 1917 revolution, Novgorod saw a rapid growth in the number of museums due to the nationalisation of private collections and confiscation of church property. However, this period did not last long. Beginning in 1929, museums were reorganised, their number reduced and the focus reviewed. The Novgorod State Museum emerged as the key institution responsible for local history research, sightseeing, and tourism, with a goal of transforming Novgorod into a city-museum.

The plan is aimed at tourists and shows all major sites and attractions, including the tour agency, hotels, diners, the post office, and banks. The index to the plan offers tours based on one-, two- or three-day stays in the city.
The plan is not drafted to scale. For user convenience it features an alphanumeric grid to help find the required site. All major tourists streets are listed under their old and new names, while distances to the sites and other reference data are provided in the index.