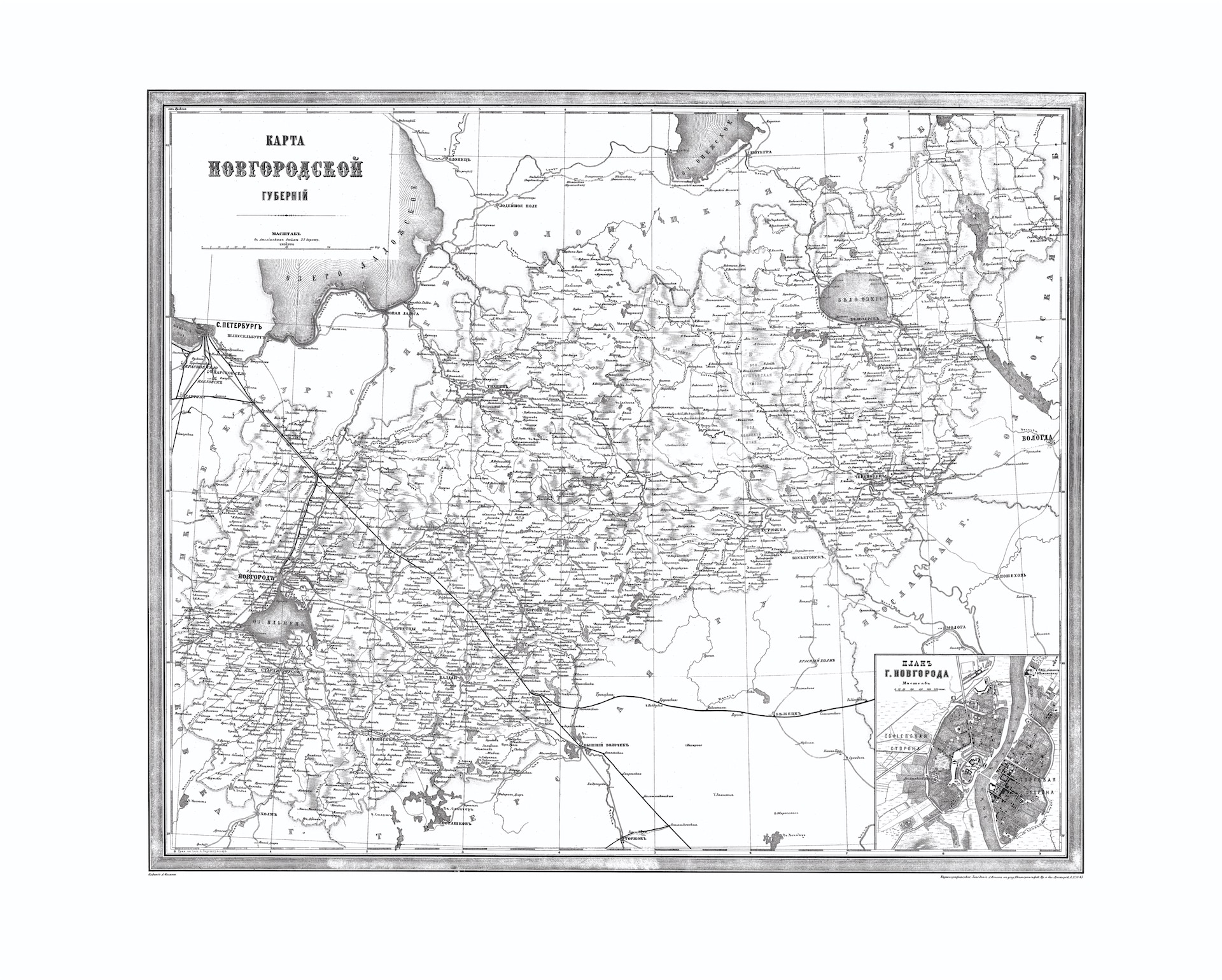 This section features maps of the Novgorod Guberniya that can be used to trace the rather complex history of changes in the region’s administrative borders in the 18th and 19th centuries.
2 section
Novgorod Guberniya as the Centre of the Earth
2 section
In 1708, Peter the Great implemented an administrative reform that made Novgorod, the ancient centre of Europe’s largest feudal republic, part of the Ingermanland Guberniya (St Petersburg Guberniya since 1710). Later, in 1727, the Novgorod Guberniya was reinstated comprising five provinces: Novgorod, Pskov, Velikiye Luki, Tver and Belozersk. In 1773, the Olonets Province was created within it, consisting of two uezds and one okruga. As regards the Pskov and Velikiye Luki Provinces, they were merged into one after the First Partition of Poland.

In 1775, Catherine II carried out a famous reform that laid foundation for the entire administrative structure of today’s Russia. The reasons were stated in her Governance Statute for Guberniyas of the Russian Empire. According to the document, some guberniyas were too big to allow for effective administration, lacking in government institutions and qualified personnel. For proper government, a guberniya or namestnichestvo had to have 300–400,000 inhabitants. The guberniya administrations were raised in status to equal colleges (institutions similar to present-day ministries), and were made directly subordinate to the Senate. All guberniyas were divided into uezds, each with a population of 20–30,000 people. The reform saw 40 guberniyas established and two oblasts (regions) of equal status to the guberniya. As a rule, one governor general was appointed for several guberniyas. The exact delimitation of borders between the newly created administrative divisions was left up to the governors to agree upon. As a result of the administrative reform, the Novgorod Guberniya was greatly reduced in size. On 25 November 1775, a Tver Namestnichestvo consisting of the Tver Province and the Vyshnevolotsk Uezd were detached from the Guberniya. The Kargopol Uezd, which was part of the Belozersk Province, was transferred to the Arkhangelsk Guberniya. A Novgorod Namestnichestvo was instituted on 24 August 1776 (effective 16 December of the same year). Essentially, it corresponded to the old Novgorod and Olonets Provinces and was accordingly divided into two oblasts — those of Novgorod and Olonets. It also comprised the uezds of Novgorod, Belozersk, Borovichi, Valday, Kargopol, Kirillov, Kresttsy, Staraya Russa, Tikhvin, Ustyuzhna, and Cherepovets. In addition, the Turchasovo Stan and the Mekhrenga Stan of the Kargopol Uezd were passed to the Arkhangelsk Guberniya and included in the Onega and Kholmogory Uezds, respectively.

In 1781, the Olonets Region and the Novaya Ladoga Uezd were transferred to the St Petersburg Guberniya, but as soon as in 1784 an Olonets Namestnichestvo (with the capital in Petrozavodsk) was detached from it. Olonets, now an administrative centre in southern Karelia, was an ancient pogost in Nogvorod’s Obonezhskaya Pyatina. At the heart of the new namestnichestvo were the Olonets Mining Plants in Zaonezhye. In the 18th century, the Petrovsky Plant was the most significant in this group, with its sloboda made into the city of Petrozavodsk in 1777. The Olonets Namestnichestvo was established on 22 May and opened on 17 December roughly within the boundaries of the namesake province. It consisted of six uezds: Petrozavodsk, Olonets, Kargopol, Vytegra, Povenets, and Kem. In 1785, two more uezds were created: Lodeynoye Pole and Pudozh. All these transformations prompted changes in maps of the Empire.

Paul I disliked his regal mother on a personal level and held her policies, including the administrative reform, in low regard, too. With the 40th day of Catherine II’s passing not yet elapsed, on 12 December 1796, Paul issued a decree On a New Division of the Country into Guberniyas, which once again changed Russia’s administrative structure. Specifically, under the new arrangement, the former Olonets Guberniya was to be divided between the Novgorod and Arkhangelsk Guberniyas with its northern areas included in the Arkhangelsk Guberniya, and the rest — in the Novgorod Guberniya, with detailed delimitation of borders to be finalised by their respective governors1.

It should be noted, however, that Paul’s reform was not about replacing namestnichestvos with guberniyas. Legally, the term “namestnik” (which could be interpreted as a person appointed to rule over a certain territory or, under Catherine II, as head of namestnichestvo) was equal to the term “governor general” and meant a person in charge of several guberniyas or the capital (e.g., see Article 93 of Chapter IV of the Governance Statute for Guberniyas: “When the Sovereign’s namestnik, or governor general...”). Contemporaries used the words “namestnichestvo” and “guberniya” as synonyms. In his Survey of the Russian Empire in Its Present Restructured State (1790), Sergey Pleshcheyev writes: “Currently, Russia includes 41 guberniyas or namestnichestvos”2. Paul’s refusal to appoint one namestnik for several guberniyas at once did not per se constitute an administrative reform.

The new boundaries of the Novgorod Guberniya were set out in the Decree on Dividing the Olonets Guberniya between the Novgorod and Arkhangelsk Guberniyas”, dated 15 July 17983. The governors of the guberniyas in question, general of the Infantry Nikolai Arkharov of Novgorod and General of the Infantry Christoph von Lieven of Arkhangelsk agreed that the uezds of Kargopol, Vytegra, Lodeynoye Pole, Olonets and Petrozavodsk would be part of the Novgorod Guberniya, while the uezds of Kem, Povenets and Pudozh would be transferred to the Arkhangelsk Guberniya. Later, due to difficulties in governing some of the remote villages located too far from their administrative centres, parts of the Povenets Uezd were included in the Novgorod Guberniya. Some of its uezds were abolished. The uezd of Kresttsy was divided between the Novgorod and Valday Uezds, while those of Cherepovets and Kirillov were joined with the Ustyuzhna and Belozersk ones, respectively (the Belozersk Uezd was in the former Novgorod Guberniya). The Olonets’s uezds of Lodeynoye Pole, Pudozh and Povenets were abolished, with the last being merged into that of Kem.

More changes followed. On 9 September 1801, Alexander I ordered to reinstate the Olonets Guberniya within its 1796 boundaries. Seven uezds comprised it: Petrozavodsk, Olonets, Povenets, Pudozh, Vytegra, Kargopol and Lodeynoye Pole. On 7 August 1824, a new, Demyansk, Uezd was established in the Novgorod Guberniya comprising parts of the Staraya Russa Uezd and volosts in Novgorod’s Valday and Kresttsy Uezds and in the Kholm Uezd of the Pskov Guberniya.

All this had to be reflected in maps. In 1720, Peter the Great sent off the students of the Maritime Academy to all guberniyas to create a detailed map of Russia and facilitate the government’s activities (until 1715, the Academy was called the Navigation School, which was the first geodetic, nautical, artillery and engineering school in the country). The outcome was the 1745 Russian Atlas.

In the future Novgorod Guberniya, topographic surveys began back in 1706 – earlier than anywhere else in the country. The reason was the project to build a Moscow–St Petersburg road. The Navigation School instructors Henry Farquharson and Stephen Gwyn supervised the effort while the surveying was performed by students. The resulting map was used by Farquharson to complete the Novgorod section of the road in 1712.

After the Great Northern War, Akim Kleshnin, one of the school’s graduates, surveyed territories that would later be part of the Novgorod Guberniya. It was his works that were used as a basis for the 1731 map of the Belozersk Uezd and Province, one of the first engraved medium-scale maps in Russia. Kleshnin’s topographic surveys were so wonderful that his 1744 resignation was not accepted. Instead, he was given an honourable assignment to survey Empress Elisabeth’s Novgorodian estates.

To ensure proper maintenance of the Moscow – St Petersburg road, further surveys were needed alongside it. In 1736–1737, geodesist Shchelkov and assessor Shchetinin drew its plan. There was an awkward situation related to these surveys. As there wasn’t enough money in the treasury to pay for this work, the geodesists, originally entitled to RUB 23.76, received “Siberian goods... of varying sorts and value on a pro rata basis” instead4. Novgorod’s significance in terms of transportation paved the way for it to appear on these maps.

The most important source of new information for reliable medium- and large-scale maps was the General Land Survey of Russia launched by Catherine II in 1765. The Empress was well aware that, however extensive this project might be, it was crucial not only from a legal standpoint, but also “for the Government to acquire proper knowledge of all lands across our State and the situations therein5.” Based on surveys of dachas (land plots) on a scale of 1:100, uezd plans were drawn on a scale of one inch to one verst. Maps of guberniyas were based on these plans. All plans and maps were hand-drawn. In 1996, Alexey Postnikov published the General Map of the Novgorod Namestnichestvo on a scale of one inch to fifty versts (included in the Russian State Library)6.

In the 19th century, Russian topographic surveys changed sharply. Not only was it that more accurate instruments and methods were used, but also a different entity was now in charge of the process, too. While the 18th century’s surveys, both by Peter’s geodesists and those part of the General Land Survey, were led by the Senate, the 19th century›s ones were supervised by the General Staff (typically, via the Military Topographic Department). Astronomical observations provided a much more accurate mathematical framework for the maps. They started as early as the 18th century, but it was not until 1842 that a marked improvement was achieved when Otto Struve’s chronometric expedition passed through Novgorod carrying twelve chronometers for better accuracy. As a result, it determined the city’s precise latitude as well as longitude coordinates.
Below are some of the key topographic surveys in the 19th century:

1824
Triangulation of the Novgorod Guberniya got underway. The southern shore of Lake Ilmen was set as the triangulation baseline. Poruchik Burckhardt Lemm oversaw the astronomical observations. After a break, triangulation resumed in 1840 and was completed in 1847, led first by Fyodor Schubert and later by Pavel Tuchkov, a namesake of the 1812 war hero. Tuchkov also supervised the levelling work.

1831–1837
Reconnaissance surveys on a scale of two versts to an inch were implemented across the Novgorod Guberniya. The effort was led by Lieutenant Colonel Mikhail Bezkornilovich.

1860–1865
Finally, the entire guberniya saw a topographic survey conducted on a scale of 500 sazhens to an inch with the work supervised by Major General Rudnev. This survey made it possible to draw up maps on the scales of ten and three versts to an inch, respectively. The maps were still in use in the early 20th century.