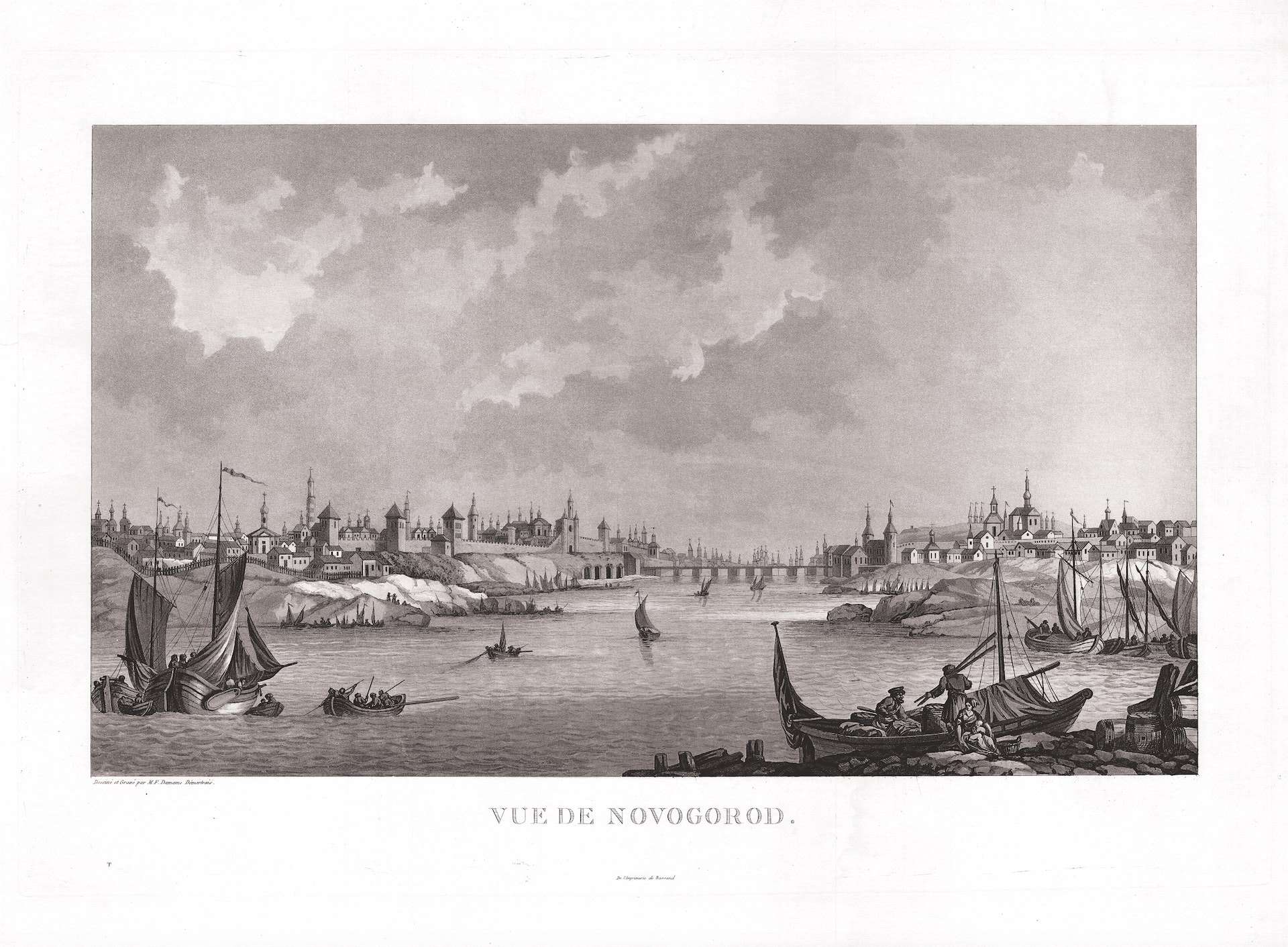 The views of Novgorod on display in Section 4 of the exhibition help trace the city’s changing visualisation in foreign and Russian graphic art. Exploring Novgorod’s image in prints, we need to focus on two closely interrelated aspects — the city’s evolving historical conception and the way it was reflected in graphic art.
4 section
Veliky Novgorod: the City’s Evolving Image in Graphic Art
4 section
In the 15–16th centuries, with the development of trade relations and exact sciences, Novgorod made its appearance in European maps and prints, taking its permanent place in the continent’s topographies and chronicles. Under the historical tradition that had developed in Europe by the 17th century, Novgorod was perceived as Russia’s ancient trade and cultural centre. In Nordic countries, the city was often considered Russia’s capital1. Benefiting from domestic and foreign trade, Novgorod emerged as a feudal entity on its own right, enjoying independence in its relations with Europe and Russia alike2. Accession to Muscovy in the 15th century resulted in Novgorod gradually changing its role and status in the region. The transition was piecemeal, however, and the city remained at the forefront of regional trade and diplomacy for a long time.

In the 17th century, Novgorod was experiencing major economic and political challenges, brought about by the Time of Troubles in Russia, the Thirty Years’ War (1618–1648) in Europe, and a number of other factors. Facing the tumultuous 17th century, Europe in its relations with Russia’s historic city was largely guided by the attitudes of European travellers. According to the maps of the time, Novgorod was no longer perceived as Russia’s pre-eminent city, but its past glory continued to secure it a place in the 17th century sources.

German scholar Adam Olearius (1599– 1671) left one of the most reliable descriptions of Novgorod of the century. During the Thirty Years’ War, Olearius took refuge at the court of Duke Frederick III of Holstein-Gottorp, who was keen on building trade relations with Muscovy. In 1633, the duke dispatched an embassy to Tsar Mikhail Romanov with Olearius as its secretary. In 1634, the embassy reached Novgorod, of which Olearius recorded: “the city of Novgorod is quite large extending one German geographic mile in circumference; previously, it was even bigger, as can be seen from the old walls of its churches and monasteries, some of which have fallen into disrepair ...”3. The drawing of ruins in the foreground was probably meant to illustrate the traveller’s statement. Recounting Novgorod’s history, Olearius described in detail its sacking by Ivan the Terrible to intimidate and suppress the city suspected of treacherous dealings with the Poles. He also mentioned that 16 years prior to the embassy’s visit, the city had been under Swedish occupation for several years. Using Novgorod’s dramatic history in the 16–17th centuries as an example, Olearius offers a sermon typical of German literature of the time. He recalls the famous saying “...who will stand against God and Veliky Novgorod” to make the inference that even a city as great as Novgorod may not withstand the hardships brought upon it by providence. His observation about the city’s tragic fate, however, is not supposed to belittle it, but is testimony to the prevalent world view in the Baroque era, emphasising the transitory nature of things.

Olearius also noted Novgorod’s advantageous geographical location: “The city’s location on the navigable Volkhov River is very convenient for trade...”4. This same geographic location, however, contributed to Novgorod’s changing historical fortunes and conception. A frontier city from the 15th century5, its importance as a major fortress and trade centre gradually declined following the founding of St Petersburg on the Neva River in the 18th century.

The Galerie Agréable du Monde (Fine Gallery of the World) by Pieter van der Aa (1659–1733) dates back to the early 18th century. This multivolume work contains a large number of city view prints, most of whose prototypes were created in the 17th century. Novgorod’s view in the Galerie was reproduced from the original by Nicolaes Witsen (1641–1717), while those of Ladoga and Oreshek — from Olearius’s book. Witsen, a Dutch cartographer and entrepreneur, visited Russia in 1664–1665 with Jacob Borel’s Embassy sent to Moscow for trade talks. He left behind travel notes, which included a detailed hand-drawn panoramic view of Novgorod that was most likely used by Pieter van der Aa in his book. The publisher, however, slightly revised the original, adding sharp foreshortening and some staffage figures in the foreground to the city’s narrow panorama. As described by Witsen, “there is a great number of monasteries and large fields outside Novgorod...” He was most impressed by the bridge over the Volkhov, which “is no inferior to the bridge in Amsterdam, but is made of wood…”6. Witsen even met Peter I, who had known him as the author of the book Ancient and Modern Shipbuilding and Navigation. He went on to serve as the burgomaster of Amsterdam, and was a prominent figure in the East India Company.

The emergence of an objective conception of Russia was greatly helped by the multitude of historical studies that saw the light of day in the 18th century. One of them was Histoire Physique, Morale, Civile Et Politique De La Russie Moderne (Physical, Moral, Civil and Political History of Modern Russia), published in 1780–1790s by Nicolas-Gabriel Le Clerc (1726–1798). This book had an atlas attached to it, featuring views of Russia’s major cities, including Moscow, St Petersburg, Novgorod and others, as well as drawings of Russian clothes and articles of daily use.

Ethnographic presentations of this kind will become very popular in the 19th century, and Novgorod’s view from Le Clerc’s book will be used as a model for a number of new works. These include depictions of the city created by Michel-Francois Damame-Demartrais and Fumagali. Michel-Francois Damame-Demartrais (1763–1828) slightly altered the figures in the foreground as if opening it up for the viewer. Another example is the view of Novgorod created by Angelo Biasioli (1790–1830) in the first quarter of the 19th century. Thanks to the copying of Novgorod’s view from Le Clerc’s atlas, it became widely available, as was previously the case with the prints of Olearius and Witsen published by Pieter van der Aa.

In the early 19th century, lithography gained prominence. It afforded more freedom to the artist and enabled higher print runs. One example would be Atlas to Materials on Statistics of the Russian Empire published by Ivan Seleznyov in St Petersburg in 1839, which contains the plan of Novgorod’s Kremlin with its towers and fortifications. As the official history and statistics disciplines were coming into their own, so was the understanding of the value behind historical architectural monuments, which shaped much of the 19th century art and thought. These monuments are depicted in the graphic work of the time: “While serving to satisfy our historical curiosity, these monuments at the same time make us appreciate our rich and glorious history...”7

In the first half of the century, romanticism was on the rise in Europe, which in our case ties closely into historicism. Artists were intrigued by the rough imagery of the Middle Ages, while the interest towards Novgorod in particular was dictated by the search, both on the part of Russian and foreign authors, for a distinctive national character and identity. In the 1840s, Paris saw the publication of An Artistic and Archaeological Journey through Russia by Andre Durant (1807–1867), an album that was sponsored by Anatoly Demidov, patron of the arts and descendant of a famous family of industrialists. The majestic grandeur of the Middle Ages Novgorod is on stark display in artworks depicting the apses in the Cathedral of St Sophia and Church of St Paul. Durant also captured the images of the contemporary Novgorod in his piece The Kremlin and Shipyards as Seen from the Window of the Governor’s House. In 1844, Ivan Pushkarev (1803–1848) published his Historical, Geographical and Statistical Description of the Russian Empire, a far cry from romanticism. He provided readers with a contemporary account of the Novgorod Guberniya, complete with the history of the city and the estates. By the mid-century, Novgorod was cemented in the minds of the people as an integral part of the Russian Empire history, which shaped the perception of the city’s past and present historical reality. This is illustrated in M. Tulev’s lithographs contained in the book. They show the 12th-century Novgorod as well as its mid-19th-century incarnation with the hallmarks of the time — a steam-powered vessel and a metal bridge.

Konstantin Burkovsky’s 1862 Art Book with Views of Novgorod paints an idyllic picture of contemporary Novgorod, aided in large part by the multicolour lithography technique. His album was most likely published in honour of Russia’s 1,000th anniversary. The unveiling of the Millennium of Russia monument was a major event in Russia’s contemporary history, even garnering overseas coverage (a 1862 publication of the French newspaper L’Illustration and an 1877 edition of American Architect and Building News).

The blending of historicism and romanticism in the 19th century depictions of Novgorod, as well as the appreciation for Russia’s history and emergence of its national identity, fanned public interest in the Russian culture. The second half of the century saw the establishment of large collections of Russian art, including folk art and more. A renowned scholar and collector Dmitry Rovinsky (1824–1895), lawyer and Privy Councillor by trade, prepared and published Russian Popular Prints in several volumes in 1881. Rovinsky’s collection of lubok prints included Veliky Novgrad, the Ancient Capital of Russia. The name of the print leads one to assume that the central image was copied from a European engraving of the 17–18th century, although the entire piece was created by Russian engravers. This depiction of Novgorod may be considered an attempt by Russian popular engravers to capture the European view of a legendary perception of Novgorod as the capital of the Russian state. The lubok print clearly shows the immense impact Veliky Novgorod made on the Russian folk culture and the study of Russian history.

When looking at a collection of artworks throughout decades and centuries, it is evident how the perception of Novgorod was continually evolving over three hundred years. In the 17th century, it was firmly planted in the rhetorical realm, being governed by traditions and the European culture of the time. The 18th century Novgorod attracted foreign artists mainly as a subject of Russian history, before evolving into a part of the Russian historical science and the official ideology in the 19th century. Over all these years, Novgorod’s portrayal in graphic works was permeated with antique motifs, with the city unfailingly able to remain relevant and influential.
3 Desyatinny Monastyr,
Veliky Novgorod
Novgorod Geography