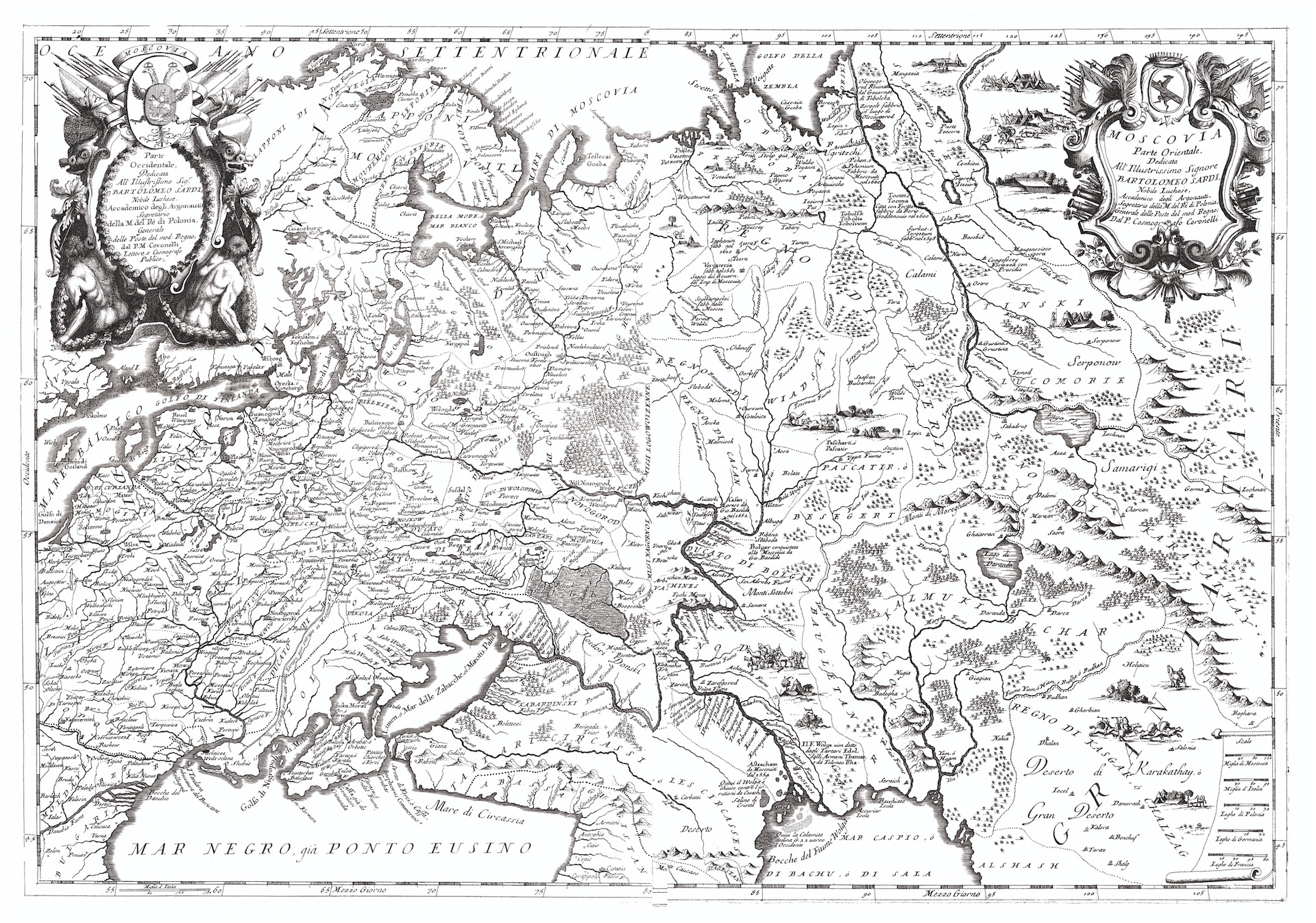 This part of the exhibition looks at the truly unique maps of Russia, as many of their originals are available exclusively in this collection and nowhere else in the country.
1 section
Point on the Map: small-scale maps of Russia
1 section
They help trace Russia’s historical geography, while also illustrating the evolving conceptions about Eastern Europe among our Western neighbours. At the outset of the 15th century, they knew little about what we now call Russia. People mostly relied on the works of ancient geographers who had believed, for example, that the great River Ra (Volga) had originated from the Riphean Mountains (Urals). To be more exact, the Ra River had been thought to consist of both the Kama and Volga rivers, with Volga being the tributary of Kama — quite the opposite of our current conception. With mostly reliable information at their disposal, ancient geographers had used to depict the European Russia in a mythical way as a mountain chain from where the rivers Ra (Volga), Borysthenes (Dnieper), and Tanais (Don) had originated.

The scientists of the time also drew extensively from the Bible: according to them, Russia was the place where the tribes of Israel that were lost during the Babylonian captivity established themselves as a nation. To top it all, there were also not always realistic stories told by ambassadors and merchants, such as Marco Polo. As a result, the Europeans’ knowledge about the geography of modern Russia had almost no bearing on real life, and even accurate information was often severely distorted.

Over time, relations between Russia and Western Europe were expanding, with ambassadors and travellers helping to shape the new perception of the country. A valuable source of information about the so-called land of the Hyperboreans was the ambassador of Grand Prince Vasili III to Pope Clement VII. Originally Dmitry Gerasimov, he became known in Europe as Demetrius Erasmus. Sigismund von Herberstein, the ambassador of Emperors Maximilian I to Vasili III, also shared unbiased knowledge about Russia. These diplomats provided an overview of the Russian river network, physical landscape, and main cities. The earliest map of the collection, the New Map of Muscovy by Giacomo Gastaldi, is evidence of this new information displacing the ancient views of Russia. Some of the latter, however, remained present with the Riphean Mountains still depicted as a latitudinal chain, albeit having moved northward to the Scythian Ocean (again a traditional name by Ptolemy).

The Western Europeans were usually interested not in Russia per se, but rather in its potential to provide the shortest route to India and China. Expeditions to find a trade route to Asia helped significantly improve knowledge of the Russian geography. The most famous one was the voyage of William Barents, after whom the Barents Sea located off the northern coasts of the European Russia is named. The Western Europeans were in search of a way from the Baltic Sea to India via the Russian rivers and the Caspian Sea. The European geographers thought that Lake Volok was the source of the main Russian rivers, including the Daugava River flowing into the Baltic Sea and the Volga River. Essentially a myth, the idea of Lake Volok had an element of truth to it: in Russia, there was the practice of carrying ships over land between rivers (“volok” means “portage”). Anthony Jenkinson of England’s Muscovy Company was the one who travelled this route to as far as Bukhara in Central Asia and further down to Persia. Jenkinson’s map is also part of our collection.

The booming Russian-Dutch trade in the 17th century (with a large Dutch trading colony established in Arkhangelsk) spurred the emergence of a new wave of geographic information about Russia. This information mainly concerned the Russian North, as the Western European merchants often visited the lands between the White Sea and Moscow. However, the southern territories, notorious for the raids of Crimean Tatars, and out of the way of Dutch travellers, mostly remained terra incognita for the European geographers. This is the reason why maps based on information from such travellers as Isaac Massa and Hessel Gerritsz are so peculiar. They depict the basins of the northern rivers, particularly the Northern Dvina, with great accuracy and reliability, while the southern territories, such as the Don basin, belong to the realm of fantasy.

The German Quarter in Moscow flourished throughout the 17th century. It was home to foreigners who were on Russian service, but did not become Orthodox Christians, and those on private trade missions. The Dutch on Russian service had access to geographical information, which was considered confidential at the time. Since they were in touch with their former compatriots, it helped improve knowledge of the European Russia and Siberia among foreigners, including Nicolaes Wittsen, a major Dutch merchant and statesman, mayor of Amsterdam. Drawing from various Russian sources, primarily from his relative Andrew Vinius, who served as head of the Postal Service and the Siberian Prikaz (department), Vitsen created a map of Russia, which had a strong influence on the Western European geographers. There is a reprint of this map in our collection.

According to Leo Bagrow, the famous researcher of cartography, it was at the turn of the 18th century when the term “the Russian cartography” replaced “the cartography of Russia”. The reign of Peter I marked a turning point in the geographic studies of Russia, as the Tsar was not satisfied with the “drawings” at his disposal. Although these maps showed transport routes, they made it impossible to design new roads or canals, because they lacked a scale and failed to account for the curvature of the earth. With all due respect to Western European geographers, Peter I opted for establishing a Navigation School to train homegrown surveyors instead of relying on foreign cartography experts. Even though this way of making maps was lengthy and expensive, it paved the way for the establishment of Russian cartography. Peter I’s surveying project began in 1720 and lasted for 20 years. It served as the basis for the Atlas of Russia by the Academy of Sciences, which was published in 1745 and marked a dramatic change in the geographical conceptions of the country. Our collection includes maps from this atlas, as well as maps published in Western Europe that relied on the 18th century Russian cartographic sources. To sum it up, the visitors of this section will be able to track changes in the mythological image of Russia, with maps gradually shedding misconceptions to emerge into the map of Russia as we know it.
3 Desyatinny Monastyr,
Veliky Novgorod
Novgorod Geography