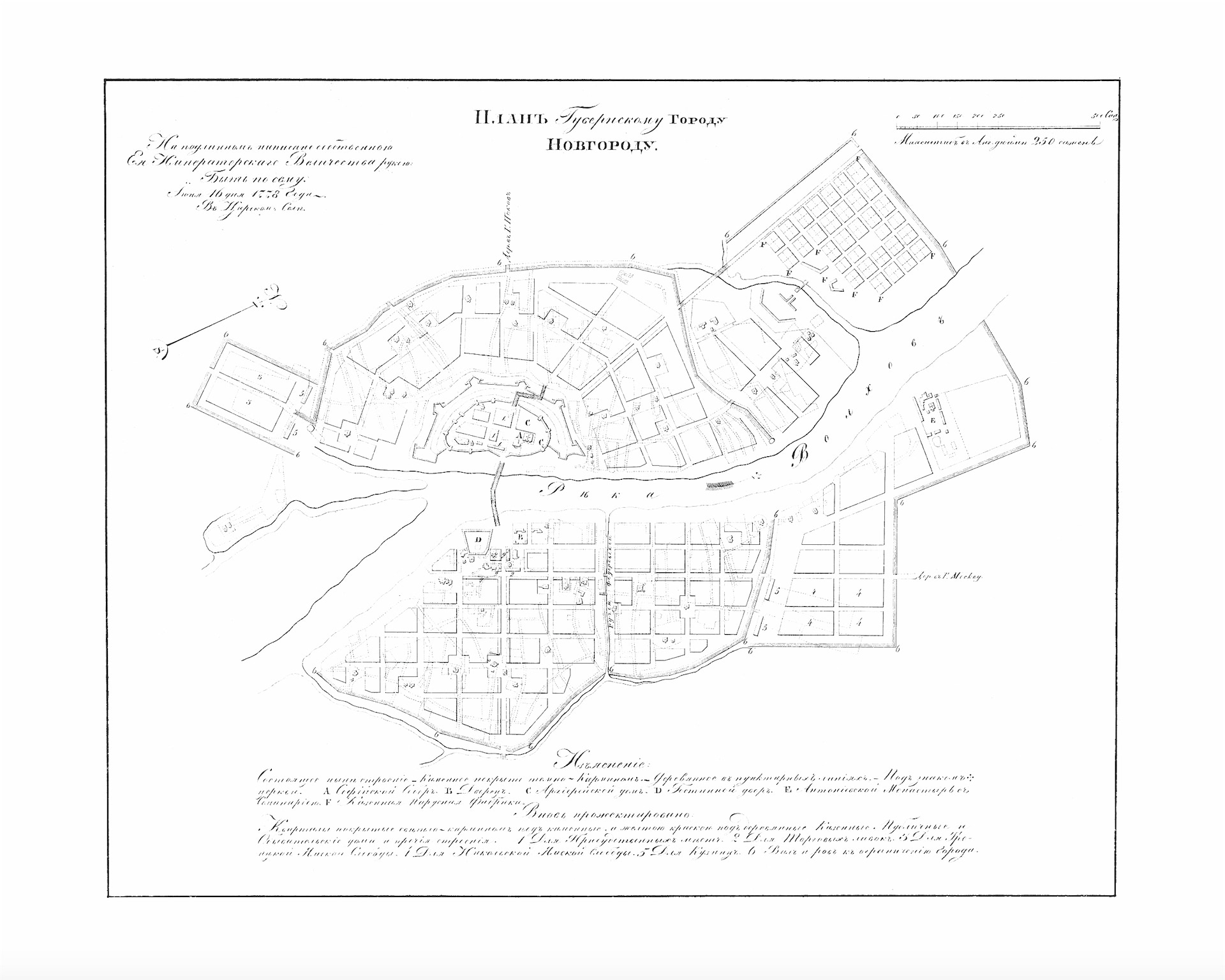 This section features maps of the city of Novgorod. Novgorod is one of Russia’s oldest cities, a major centre of medieval trade and crafts, and an important partner of the Hanseatic League.
3 section
Topography of Veliky Novgorod
3 section
It was the capital city of the vast Novgorod Republic (1136–1478), bordering Pskov in the west, Polotsk, Smolensk, and Tver principalities (and after their conquest — the Great Duchy of Lithuania) in the south, and the Vladimir-Suzdal Principality in the east. During the occupation of Polotsk and Smolensk, Novgorod’s southern border was with the Great Duchy of Lithuania. Its possessions in the north included Karelia and the Dvina and Pechora lands, stretching all the way to the Arctic Ocean and the Northern Urals.

We can say with confidence that Novgorod’s archaeology has been investigated
much better than that of any other Russian city. Novgorod is first mentioned in annals in 859, which is considered its founding date. However, archaeologists now say that the chronicles refer to Gorodische, a fortress on the right bank of the Volkhov River, two kilometres upstream of the modern-day city. From the mid 9th century Gorodische served as the residence of Novgorod’s princes. Located on the upper Volkhov River, some four kilometres from its source in Lake Ilmen, Novgorod proper emerged as a city at the turn of the 10th century. It came about following the merger of three ethnically different villages on both sides of the Volkhov: Liudin and Nerevsky on the left (Sofiyskaya) Side and Slavensky on the right (Torgovaya) Side. These original settlements would be later called ends, or districts. In the mid-10th century, as a result of Princess Olga’s 947 campaign, Novgorod began collecting tribute along the Luga and the Msta Rivers.

In the early period of Novgorod’s history, there were no city walls, with each end building a separate defence system. Novgorod’s single urban structure evolved around the fortress known as the Detinets (Kremlin), the earliest reference of which dates back to 1044. The fortress united various parts of the city, as well as its ends, under a singe fortification structure and started to be called Novgorod, that is “new city”, the name eventually used in relation to the city as a whole. The period between 1045 and 1055 saw the construction of the Cathedral of St Sophia inside the fortress.

According to chronicles, by early 12th century Novgorod was a big city by medieval standards. The second half of the century saw the formation of the fourth, Plotnetsky, end on the right bank, which was followed in the 13th century by the fifth, Zagorodsky, end on the left bank. From the second half of the 12th century, individual tall buildings started to give way to extensive low-rise development. By the mid-13th century, all construction projects ground to a halt amid a constant threat of invasion from the Golden Horde and the West.

The city’s urban landscape reflected Novgorod’s location on major trade routes. The so-called “breaking through” streets ran along the Volkhov banks through the city and towards the Baltic. The streets crossing them were those running uphill from the river banks. Many of these streets had their own communities with a veche that resolved neighbourhood disputes and was responsible for local amenities, such as renewal of wooden pavements and drainage systems.

The city’s administration comprised the two main population categories: the boyars, free from paying taxes, and the so-called black people, namely free craftsmen, merchants, etc. Boyars’ estates were united into ends, which had their own veches, while black people organised themselves into sotnyas (literally “hundreds”) totalling ten. The city’s religious powers also had some distinctive features shaped by Novgorod’s political, economic, and social developments. Since the German and Swedish aggression on Novgorod and the invasion of the Golden Horde, Novgorod’s Archbishops have played an active role in the city’s foreign policy. They kept the state treasury and sat in local and commercial courts. Over time, Novgorod’s Archbishop accumulated around himself a substantial amount of lands, which were not subject to parcellation, unlike those under feudal jurisdiction. By the time of the termination of Novgorod’s independence, its monasteries were attributed to each of the city’s five ends, with the Skovorodsky, Antoniev, Nikolo-Belsky, Annunciation, and Arkazhsky Dormition monasteries being the main monasteries of the Slavensky, Plotnitsky, Nerevsky, Liudin, and Zagorodsky ends, respectively.

Despite the extensive archaeological investigations and data on Novgorod’s mansions and streets, there are no 16th-century cartographic materials (let alone the earlier ones) that would give us an idea of how the city’s planning was arranged before the 17th century. Regretfully, archaeological data fails to give a clear picture of the 16th-century urban
development.

In 1471, Novgorod suffered a heavy defeat by the Grand Prince of Muscovy Ivan III, losing its independence in 1478. Ivan III disbanded the Veche, abolished the office of posadniks (mayors), and liquidated the Republic. All the city’s major landholding families were deported to other parts of Russia, while the lands seized from them were given to Muscovites settling in Novgorod.

The Massacre of 1570, the Livonian War of 1558–1583, when the city partly lost its territory, and the Swedish occupation of 1611–1617, delivered Novgorod a hard blow. Following the loss of access to the Baltic Sea and the opening of a new seaport in Arkhangelsk, Novgorod found itself excluded from the foreign trade route system.

During the reign of Peter I, with his success in the Great Northern War, the expansion of Russia’s borders, the regained access to the Baltic Sea, and, above all, the construction of a new capital, St Petersburg, Novgorod eventually sunk into provinciality. Still an important city along the domestic trade routes and on the road to St Petersburg, Novgorod was no longer a fortress.

“Geographical drawings”, many of which were a product of land disputes between monasteries and their neighbours or between landowners, give us rough information on what the city streets or monasteries looked like in the 17th century.

By saying rough we mean that such drawings lacked a single scale, a coordinate grid, and realistic proportions. The details presented with the utmost accuracy were land borders, location of natural and man-made objects, and topographic data, often accompanied by explanatory texts.

Detailed records about the 16th- and 17th-century land plots can also be found in cadastres, such as The Cadastre on Veliky Novgorod in the Late 16th Century. Being essentially land registry documents with data on land tenure rights used as a basis for tax calculation, they are an excellent source of information for specialists wishing to recreate the topography of Novgorod. The cadastres list yards, ownership, land plots allocated for streets, churches, owners’ occupation, and provide a written description of the urban area following the design works.

The medieval Novgorod’s layout is also featured — all of a sudden — on icon drawings dating from the time prior to Peter I’s reign. Although these date back to the 17th century, they represent a valuable source on the topography of medieval Novgorod, and especially the Detinets. The buildings and streets shown in these plans are named in chronicles and verified by archaeological excavations.

Old city plans usually comprise interconnected phenomena: based on a drawing or plan of an earlier period, they contain both changes that have already taken place, as well as those still ahead of. Therefore, we shall bear in mind that time periods are something ill-defined when it comes to old plans. For example, a 1673 drawing of Novgorod by Erik Palmquist actually reflects the events of the 1730s.

Here, the system of wooden pavements serves to define topographic landmarks. For centuries, wooden pavements were used for pedestrian and transport movement. Due to the rapid growth of the cultural layer on both sides of the wooden decks, new pavements were laid onto the previous ones long before those were worn out. Thanks to dense slowly permeable loam soils in Novgorod’s foundation, consistent over-watering of the cultural layer helped preserve organic remains and formed a kind of a multi-storey wooden “skeleton” of the street network, which remained unchanged until the 18th century, when its upper layers were dried following the upgrade of the drainage system. This allowed creating a new city layout not linked to the old pavement system.

On 16 July 1778, Catherine II approved Novgorod’s new urban development plan based on a grid system, which completely changed the city’s appearance. It envisaged a rectangular grid plan for the Torgovaya Side and a radial-concentric layout for the Sofiyskaya Side. At the turn of the 19th century, the 1778 General Plan was set in motion. Under the plan, some of the ancient streets were straightened up, with new streets and buildings constructed. The Torgovaya Side saw the creation of the Znamenskaya Street and the Bolshaya Moskovskaya Street, which became a new road to Moscow. Only stone buildings were permitted on these streets, which were the main highways of this part of the city. However, things do not always go as planned — over time, some residents wishing to save money were granted permissions to build wooden houses there. On the Sofiyskaya Side, the plan focused on the construction of large streets overlooking country roads. Since the mid-19th century, the Sofiyskaya Square in front of the assembly of nobility became the heart of Novgorod.

Broadly speaking, the residential development activity was slow, with land plots occupied by gardens and kitchen gardens here and there in the city as late as in the 19th century. Large stone buildings, including factories, were mainly constructed by nobles and merchants. The Novgorod–Chudovo railway line connecting Novgorod with St Petersburg and Moscow was built in the middle of the 19th century.

At the turn of the 20th century, Novgorod saw the construction of a water supply system, a power plant, and a new bridge over the Volkhov River to connect the Detinets and the Torgovaya Side.

Curiously enough, since the middle of the 19th century Novgorod has been attracting tourists interested in the history of Russia; at the time, city plans were created galore as part of travel guides for travellers and pilgrims.

During a challenging economic period after the 1917 revolution and prior to World War II, urban development in Novgorod was confined to the renaming of city streets and squares. However, all these changes had no significant impact on Novgorod’s historic centre: its layout has mostly survived to the present day since the mid-19th century.
3 Desyatinny Monastyr,
Veliky Novgorod
Novgorod Geography